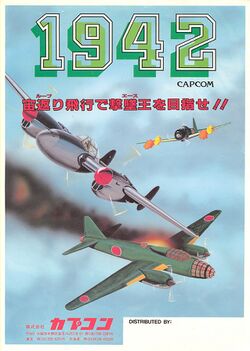 1942 is considered to be one of the defining games of the vertically scrolling shooter genre. Among Capcom's earliest games, 1942 was one of the most successful. The subject of the game isn't hard to figure out. You play as an American pilot pitted against the entire Japanese Air Force during World War II in the titular year. Following the format established by Xevious, enemies come out in periodic waves, taking shots at your plane before turning around and attempting to escape with their lives. Larger aircraft that require more shots to destroy appear less frequently and add to the challenge by blocking shots fired at enemies higher up the screen. Besides shooting, the player can also perform a 'loop-de-loop' to avoid enemy projectiles. 1942 incorporates a few power-ups that can help increase your plane's firepower, while also increasing your exposure.

1942 was picked up for distribution on several popular European home computers by Elite Systems, and was later relicensed for distribution by Encore. ASCII Corporation brought 1942 to home computers in Japan by porting the game to the MSX1 computer system, and later releasing a graphically updated version for the more capable MSX2 computer system. Capcom personnel ported the game to the Famicom/NES system which sold very successfully. While 1942 was not the first Capcom game to receive a sequel, it was their first game to spawn a series, including the more successful follow-up, 1943. 1942 has also been subsequently released on several Capcom compilation titles for many later-gen systems.

1942 is set in the Asian theater of World War II. The goal is to reach Tokyo and destroy the entire Japanese Air Force. The player (the American 'Super Ace') pilots a plane, and must survive wave after wave of Japanese air fleets, shooting down as many enemy planes as possible.