From StrategyWiki, the video game walkthrough and strategy guide wiki
(Redirected from 1943)
Jump to navigation Jump to search

1943: The Battle of Midway | Table of Contents | Gameplay | Walkthrough 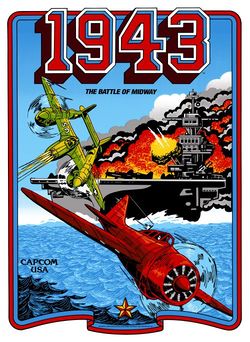 1943: The Battle of Midway, known as 1943: Middouei Kaisen in Japan, is a 1987 vertical shooter arcade game developed and published by Capcom. It was the first follow-up to Capcom's earlier 1942. The game's name is a reference to the Battle of Midway, which in actuality happened in June 1942.

The game is set in the Pacific theater of World War II, off the coast of the Midway Atoll. The goal is to attack the Japanese air fleet that bombed the American aircraft carrier, pursue all Japanese air and sea forces, fly through the 16 stages of play, and make their way to the Japanese battleship Yamato and destroy her. 11 of these stages consist of an air-to-sea battle (with a huge battleship or an aircraft carrier as the stage boss), while 5 stages consist of an all-aerial battle against a squadron of Japanese bombers with a mother bomber at the end.

As in 1942, players pilot a P-38 Lightning. Players now have only one life, in the form of a large "fuel" meter; constantly depleting, but refillable by collecting various powerups (chiefly "Pow" icons). In 2-player mode, when both players overlap their planes on screen, the energy bar can be transferred from the player with more fuel to the player with less. Destroying a complete formation of red enemy planes will result in a power-up, such as a health boost or a new main weapon.

Capcom released their own port for the NES, which introduced the ability to upgrade the P-38 throughout the course of the game and featured 24 levels instead of 16. The game was also ported to the Atari ST, the ZX Spectrum, the Amstrad CPC, the Commodore 64 and the Amiga. In 1998 it was rereleased as Capcom Generation 1 for the Sega Saturn and the PlayStation. In 2005 it was re–released for Xbox and PlayStation 2 as part of Capcom Classics Collection, and again in Capcom Classics Collection: Reloaded on the PlayStation Portable. It also included as the initial game in Capcom Arcade Cabinet, a compilation of games released digitally for PlayStation 3 and Xbox 360 on February 19, 2013 in which the games are sold individually or in packs. The overall faithfulness and quality of execution of these third party versions varies greatly.