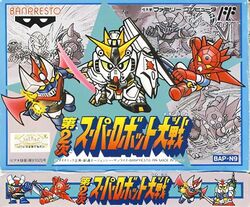 Bian Zoldark has revealed to the world that an alien invasion is imminent. He has also analyzed that the Earth is not prepared to handle such a threat. In order to protect the world, he has built the most powerful weaponized mech: the Valsion. However, Bian believes that this alone will not be enough. In secret, he establishes a society known as the Divine Crusaders. The DC will unite the world under one banner to save the planet... no matter the cost. In 2nd Super Robot Wars, you control a resistance built from three Super Robots that evaded capture. Your objective is to go through twenty-six scenarios in order to liberate the world from DC's rule while rescuing captured Super Robots along the way.

This is the first game in the series that show pilots as well as the first appearances of Banpresto-regulars Masaki and Shuu. The game operates on a top-down perspective that will be used throughout most of the series until Masou Kishin. This game includes robots and pilots from the Gundam, Getter Robo, Mazinger Z, and Grendizer series.