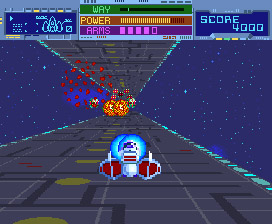 Namco's 1986 three-dimensional shooter arcade game, 3-D Thunder Ceptor II (which ties with its predecessor for the titling of their most powerful 8-bit game) is divided into six commands (which is two more than the original); and as with the original, the game will start immediately as soon as you have inserted your coin. For the second time, you must use the analogue joystick (the controls of which are, again, "reversed"), buttons and the acceleration pedal, you must make it from the start of each command to the end, before running out of power - if that should happen, your game will immediately be over and your play time, score, and ranking will be displayed in the centre of the screen. However, after you have made it to the end of each command, the text "CONGRATULATIONS! COMMAND X FINISHED." (X, again, being the number of the command) will appear on the screen before immediately proceeding to the next command (unlike in the original, there are no end-of-command shooting-down reports and bonuses. You should remember this).