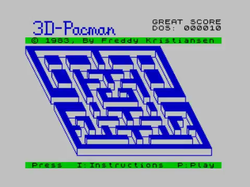 3D Pac-Man is a self-published action game that was released on the Sinclair ZX Spectrum in 1983, only in Denmark; as the name implies, it stars Namco's signature character, Pac-Man, but the player must use the 5, 6, 7 and 8 keys or a Kempston joystick to control him from a first-person perspective (despite the maze, which is the one from the original Pac-Man and Pac-Man Plus but containing 162 pellets as opposed to 244, being shown in an isometric perspective on its title screen). Although you can press the P key on the game's title screen to start it immediately, you can also press the I key to read the game's instructions (which are seen below, and all the spelling mistakes are also accurate):

Once you have pressed Enter, the text The maze: will appear on the screen with an overhead view of the maze below it (the four power pellets and Pac-Man's starting position will also be flashing on it): 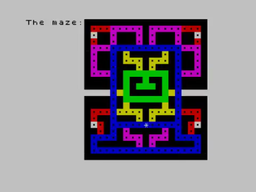 Once you have pressed Enter again, the third page of the game's instructions will be shown on the screen (again, the spelling mistakes are accurate):

Once you have pressed Enter again, the final page of the game's instructions will be shown on the screen (again, the spelling mistakes are accurate):

Once you have pressed Enter again, the text Kempston Joystick? will appear on the screen; once you have pressed either Y or N, the game will start. Pac-Man's view of the maze is shown in the centre of the screen, with the player's current score ("POINT"), round number ("SCREEN"), amount of remaining pellets ("PILLS"), condition (which will always be "GREEN" on the first round, as there are no ghosts), amount of remaining lives ("LEFT") and direction (which is indicated with an arrow) below it - and the radar display to their left shows Pac-Man's current position in the maze but not those of the remaining pellets (so it can be difficult to remember where they are). Once you have cleared the first round, a ghost will be introduced; his position in the maze is also shown on the radar, and if he gets too close to Pac-Man, the condition will change to "RED", but when Pac-Man eats a power pellet, it shall change to "BLUE" until he either eats the ghost or the pellet's effect wears off. If you manage to clear the second round, another ghost will be introduced - and once the ghosts have killed Pac-Man three times, the text "Game Over" will be drawn on the screen. If you have a new great score, the text "Great Score" shall also be drawn on the screen as the text Use arrow keys to find letter and press ENTER. (3 letters) appears below it; once you have entered your initials the game will go back to its title screen. Thirteen years after this game was released, in 1996, Virtuality Group took the first-person Pac-Man concept (which was pioneered by Nüfekop Software in 1982) and made it more official by releasing Pac-Man VR under license from Namco themselves.