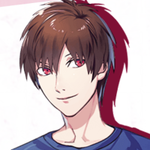 Hino Kagutsuchi (迦具土 ヒノ, Kagutsuchi Hino?) is Ichiko's childhood friend, and thus is with her at the start of her journey. He will occasionally worry for Ichiko in other routes, but his crush on her only becomes clear in his route. He currently attends the same school as her, though his above-average athletic ability has landed him some extracurricular activities in the form of the university futsal club. Though he does his best to hide it, Hino also has a weakness for cute things, collecting merchandise featuring cute characters such as mascots.

Due to his connection to Ichiko, it is recommended that Hino's route be played first, though Isora's route can also be played from the start. His Normal End provides a CG and Bad End #1 provides a Tip.