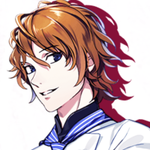 Isora Amari (甘梨 イソラ, Amari Isora?) is a high school student residing in Okunezato. He is currently working a part-time job as a chef at the Fuurinkan Hotel, where Ichiko and Hino stay while visiting Okunezato. It is also the meeting place of the Okunezato Supernatural Club, making him something of an honorary member of the club despite never having signed up for it. Though Isora is generally cheerful, he despises his boss, Yuzuki Murakumo, and can often be found complaining about him. He dreams of becoming a pastry chef.

Like Hino's route, Isora's is unlocked from the start, though it is recommended that his route be played after Hino's. In scenario select, feel free to skip the prologue and start from the first chapter, as there are no choices before that point. This should also be done for all subsequent routes unless otherwise noted. Lastly, take note that Isora's Normal End provides a CG.