When the Galactic Federation authorized a Research team to investigate SR-388, they provided that team with a vessel, the GFS Thoth. With the team trapped below the surface, the vessel lays dormant. If you manage to find a way to reactivate the lift which transported the research team to the depths of the planet, you can explore the vessel and its surroundings. Although it seems vacant, you may not be the only living being aboard the craft...

In order to reach the GFS Thoth, you must return to the Research Site any time after you have acquired Power Bombs. If you stand on the platform outside of the door where the researchers perished and detonate a Power Bomb, the rocks lodged in the roof will disappear, and an elevator will reactivate. Ride the elevator up to an alternate surface of the planet, where the GFS Thoth sits dormant.

There are two regions of interest in this area; the spacecraft itself, and the exterior all around the Thoth. The exterior is the less complicated of the two. You begin in room A. If you explore far to the left, you'll find the entrance to a small cave, room B. Inside this cave, you will find a Power Bomb expansion. Likewise, if you travel all the way to the far right, you will find another Power Bomb expansion sitting right out in the open. Before you've even set foot in the ship, you've increased your Power Bomb supply by four.

You can enter the ship itself through either the left entrance to room C, the or the right entrance to room G. Either way, the bottom level of the ship is empty apart from deceased crew members. Your goal is to reach the elevator in room F and ride up to the second level. If you explore room H to the right, you'll find a cockpit. Your logs will be expanded to point out that the motion sensors indicate no movement anyone on the ship with the exception of the east wing of level 3.

Enter room I to the left. It will appear to dead-end, but you can find a brick to bomb which will expose a hidden passage to room J beyond. Room K, to the left of room J, is another seemingly empty room. But if you bomb the lower left corner of room K, you can find a hidden passage which leads to a save station. After saving your game, return to room J and ride the elevator up to the third level. 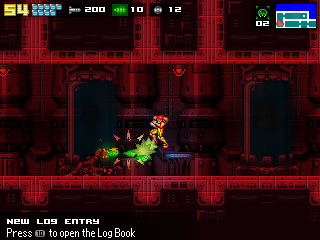 This predator relies on stealth, attacking in the dark.

From the elevator, enter the only room on the third level, room L. Run all the way to the far right side, and you will collect an Energy Tank. Now as you start to head back to the left, you will find that the door to the elevator is locked. You will now be attacked by a creature called the Genesis, named so because it believed to be the original predator species of SR-388.

Genesis has no real defensive capabilities, and relies primarily on stealth, moving swiftly through the darkness of the room. It attacks in a relatively straightforward pattern. It starts by jumping up to the ceiling and crawling across it to get to the opposite side of Samus. Then it jumps down at a diagonal angle. If it lands close to Samus, it scratches her with a powerful attack. However, if you run far enough away from Genesis, it will opt instead to spit acid at you from a distance. After either attack, it leaps back up to the ceiling and repeats the attack. You must take any opportunity to attack it, either when its crawling above your head on the ceiling, or when it leaps down to the ground to attack you. Even with a full supply of Energy Tanks, it can reduce Samus' energy to 0 without a lot of effort.

Once Genesis is destroyed, and you have collected the two Power Bombs and one Energy Tank, there is nothing left for you to explore in this region. Return down through the elevator to the Research Site and continue your mission.