Samus finally reaches the final destination of her journey. Most of the remaining Metroids that are left are larval Metroids, like the kind she encountered on planet Zebes in the original Metroid game. They haven't even evolved to Alpha Metroid status. However, once she travels deep enough into the lab, she will come face to face with the originator of the larvas, the Queen Metroid herself. And only one of them will survive the encounter. 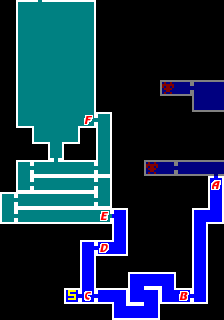 After lowering the lava in the tunnel below the nest, you can drop to the bottom, roll through the narrow passages, and then bomb your way down to the lower portion of room A. Once you've bombed through the platforms, you can drop straight to the bottom. Head left into room B, which is a long tunnel that snakes around as it ultimately heads left. You can use the Screw Attack to remove any of the insects or flying enemies that get in your way. 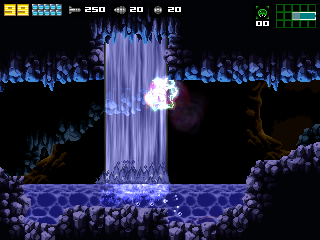 Jump through the waterfall-filled tunnels.

Room E, and what follows, is a series of rooms that you must run through and climb in order to reach room F above. These rooms contain no enemies and no choice of direction, so they haven't been labeled on the map. Each long room is simply an underground tunnel containing waterfalls from the region above, and pools of water collecting on the floor. Continue to the far side of each room, where you must climb up to the next level to continue. After the final corridor, you jump up a long vertical chamber until you reach room F.

Room F is a giant empty room which you must Space Jump to reach the top of. If you explore the very bottom of the room where the water collects, you can actually fall through with a waterfall to the upper portion of the corridors below. Instead, jump all the way up to the top, where you will find the entrance to the laboratory through a hole in the ceiling, closer to the left side of the room.

You arrive in the laboratory through room A, which contains nothing but a door to the right. Through the door is a save station. Save your game, and exit through the next door on the right to room B. Across the way to the right is another door. This door leads to room C which contains a transportation chute. This chute leads you back to the Hydro Station, which you can use as a quick conduit to other areas if you wish to pursue any item collection before you face the final challenge of the game.

Back in room B, jump up to the top, and pass through the door to the left, to room D. Upon entering, room D appears to dead-end, but the map indicates that it continues on to the left. The lower left portion of the wall can be bombed away, creating a path to the left. Room E is a vertical chamber that you must navigate to reach the top. When you do, you will catch a glimpse of Metroid egg in the passage above you. At the same time, your scanner will detect 9 new Metroid life signals. Roll through the narrow passage at the top to the right to reach room F. 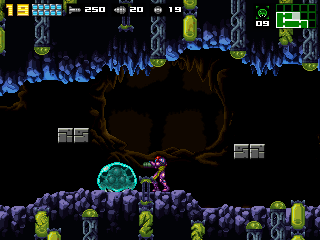 Fire missiles rapidly after you freeze a Metroid.

Pay close attention in this room. As you begin walking to the right, a life form will appear from the background and attack you. This is the first Metroid larva that you must face. Just as they did in the original Metroid game, they will take any opportunity to latch on to you and drain the energy from you. If they do this, your only defense is to convert to Morph Ball form and detonate a bomb in their vicinity. The bomb will stun them, but only momentarily, and they will resume their attack without hesitation. To defeat the larva, you must freeze them with the Ice Beam. Once frozen, you must shoot five missiles at them, or one Super Missile, to defeat them for good. If you're using missiles, be sure to fire them off very quickly. Do not give the Metroid a chance to thaw and attack you again.

Once you destroy the Metroid, the door to room G will activate. Head through it and work your way up to the top. As you approach the next door, another Metroid will zoom in from the background. Freeze it and hit it with missiles in order to proceed to the next room. Room H is an empty room. Run straight across to reach room I. Just as you begin to jump up, another Metroid will attack. Destroy it before you proceed, as a second Metroid is waiting closer to the top. You must destroy both before the door to room J opens.

Room J is a long corridor, and the floor is lined with spikes, so you must jump from the safety of one platform to another. Towards the middle of the room, a Metroid will attack. Lure it out and then attack it from a platform before you continue to the left. Be aware that there is another Metroid waiting the room. It will appear as you are jumping over to another platform. Get far ahead of it and turn around to attack it before it reaches you. Then continue left to room K. 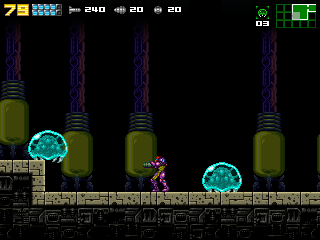 Keep both Metroid far away from you to be safe.

When you enter room K, you will be stuck in the upper portion of the room. A bomb anywhere on the floor will collapse the whole structure and give you access to the portion below. However, there are two Metroids waiting for you below. They are likely to appear and attack simultaneously, so be prepared. Keep them both frozen, and remove them with Super Missiles to get rid of them quickly. If you are watching the Metroid life count, you are down to just one remaining. Proceed through the lower left door to room L.

Drop down to the bottom of room L and head through the door on the right to room M. As you pass through the long corridor, the floor will become covered in spikes until you are forced to Space Jump your way through the remainder of the room. When you reach the right side, you must drop through the floor to make a surprising discovery.

It is here in room N that you come face to face with the Queen Metroid. She will not be happy to see you. She is as large as the room she occupies, from floor to ceiling, so there is no possibility of getting around her. You must take her on and defeat her in order to escape. Unlike the other advanced Metroids that you've faced, her torso is completely invulnerable to attack. Instead, her weak point is actually her head, which is a very prominent target which she uses to attack you. 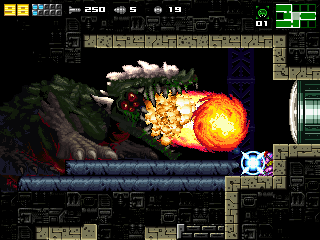 The Queen will create a new pathway behind you.

Initially, you must shoot her head with missiles and Super Missiles, all the while dodging her head when it darts out to attack you. After a while, she will stop attacking with her head, and the horns on her head will start to glow. When they do, she will retreat a short distance, open her mouth, and release a series of strange organisms that float around the room and damage Samus. While a threat, these organisms can also benefit you if you manage to shoot them and freeze them. When destroyed, they leave behind a cache of energy and missile ammunition. You can use these as an opportunity to refuel, but do so carefully, as the Queen will resume her attack as soon as the organisms are released.

After receiving enough damage, the Queen will stop attacking. She will take a short step back, and build up a lot of energy before releasing a fireball from her mouth. This fireball will destroy the wall behind you. The Queen will advance and force you to head back to the right. Then the fight will resume. You must continue nailing her head with missiles until she steps back and releases another fireball. This will continue four times until you are pushed all the way back to room O on the map. When this happens, you have no where left to run. The Queen will dart her head out and clutch you in her maw. Samus will raise one hand and point her gun down the Queens throat. Fire multiple rounds of missiles into the Queen. If you don't destroy her in time, her jaws will snap shut, and then she will lash out and catch you again. Continue shooting missiles until the Queen can handle no more and ultimate explodes. [*Note*: Alternatively, When you are in the Queens jaws you can roll into a ball and enter her stomache and kill her with a single super bomb in Normal Mode.] You have defeated the last Metroid threat on SR-388. 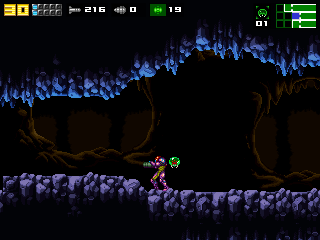 This baby Metroid will aid your escape from SR-388

After defeating the Queen, head back to the left all the way until you reach room P and stumble upon the egg that you previously saw. The egg will hatch and a baby Metroid larva will appear. It will imprint on Samus and follow her wherever she goes. Continue left, and you will begin to notice that it only leaves you to feed on the light blue substances that you will occasionally encounter.

Head through this room, and follow the path through the rest of the map. As you proceed, you will eventually hits locations where the light blue substance blocks your progress. But the Metroid larva will happily consume it and create a path forward. As you follow the tunnel, it will bring you back to the surface of the planet. You will arrive in the canyon opposite your landing site. Thanks to your increased abilities, you now possess the power to get over the cliff in the middle and return to your ship. Step inside your ship to evacuate from SR-388 and end the game. Congratulations.