Samus Aran is the heroine of the Metroid video game series. She is a bounty hunter armed with a cybernetic power suit with a number of advanced technologies built into it. She hunts aliens called the "Space Pirates" and energy-draining alien parasites called "Metroids", while attempting to complete missions given by the Galactic Federation. Samus is considered one of the earliest and most significant female protagonists in the history of video games.

Samus' main distinguishing feature is her Power Suit, a modular suit of armor created for her by an alien race called the Chozo. The Power Suit's main purpose is to protect her from adverse environments and enemy fire. The suit can be upgraded to various other forms for added protection, and receive various power-ups which augment her abilities, including Space Jump boots, energy tanks, the Screw Attack, and numerous modifications to her weapons.

Little is known of Samus' past, yet details of her beginnings can be gathered from various sources, including the instruction manual of Metroid Prime, and the Metroid e-manga. Her biography in Super Smash Bros. Melee states that she was orphaned during a Space Pirate raid on her homeworld of K-2L. It also states that she was subsequently rescued by the bird-like Chozo race and infused with "Chozo blood". Information in Metroid: Zero Mission and Metroid Prime strongly suggests that she was raised on the planet Zebes by the Chozo, who referred to her as "the Hatchling", and that she became their most prized warrior.

In the original Metroid, Samus Aran ruined the Space Pirates' plans to use the newly discovered lifeform known as Metroid. In Metroid II, the game upon which AM2R is based, the Galactic Federation sends several teams to the Metroid's home planet, SR388, to destroy them once and for all and ensure that the Space Pirates can never obtain any more Metroids. However, when each of the teams disappear, the Galactic Federation contracts Samus to finish the mission. 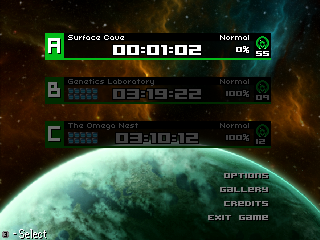 When starting a new game, you are given three save slots to choose from. If you choose an empty slot, you will be given the option to begin a new game with one of three difficulties; Easy, Normal, or Hard. The difference between Easy and Normal is minimal, with enemies being easier to defeat and doing less damage in Easy than in Normal. However, in Hard mode, ammunition expansions such as the Missile Tanks provide smaller increases in capacity. Enemies are a bit more difficult to defeat, as they do more damage, take less damage, and in some cases are generally a bit smarter.

Once a game is saved into a slot, you can continue that game, copy it to another slot, or delete the save. When you continue a game, you resume from the last save station you visited. Any subsequent visits to save stations will save the game to that same slot. When you copy a save to another slot, the original slot will remain. If you attempt to copy a save to an already filled slot, the game will ask if you are sure before proceeding. Likewise, if you choose to delete the save in a slot, you will be asked if you are sure first. Once a save slot is deleted, it cannot be restored.

In addition to the three save slots, there are some items to choose from below, including Options, Gallery, Credits, and Exit Game. Gallery shows you all of the ending artwork you have unlocked (out of a total of three images.) Credits displays the names of all the people who contributed to the game's development (you can interrupt the credits and return to the main menu at any time.) And Exit Game naturally exits the application. The Options available are described below.

Sound options
In this menu, you can independently set the volume of the in-game sound effects, and the background music. You can make one louder than the other, or mute one or both entirely.
Control options
See the Settings section of the Controls page.