The Research Site is less a full area to explore, and more of a detour which you must take in order to further explore the rest of the planet. At the site, you will make an unfortunate discovery about the fate of the team which was sent by the Galactic Federation to study the planet. In the process, you will discover more Metroid which must be eliminated before you can proceed. This is a good opportunity to collect some other items which may have been out of reach until now. 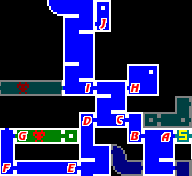 Head left from the save station at the entrance to the Industrial Complex. In room A, you'll notice that the lava here hasn't sunk. The earthquake triggered the reduction of a different lava pool. Continue left to room B. Make your way through the narrow passages to the top, and left into room C. Run across the bottom to room D, and it is here that you will find a new pathway to explore. Drop down through room D as far as you can go before you reach the new level for the lava pool. Head left to room E to enter the research site. 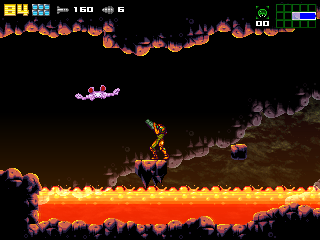 These creatures leap out of the lava.

Room E is a corridor that is covered with a shallow layer of lava. It is occupied by a species that bathes in the lava, and leaps up into the air when it detects movement. It then wafts back and forth as it drops down into the lava. Head left into room F, and climb up to the top. You'll see an interesting device on the floor, but it remains inert. If you happen to Spider Ball your way up to the ceiling and bomb the blocks above the device, they will display a tile indicating that they can only be removed with Power Bombs. Since you can't do anything else at this time, shoot the door on the right and investigate room G. 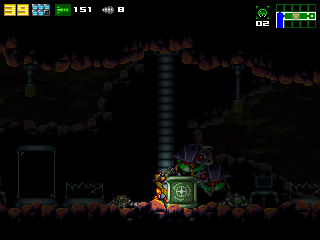 You will stumble upon the remains of the research site. They lost access to their vessel, and all of the inhabitants of the room perished. All that remains are their bodies and some failing equipment. If you head all the way to the right, you'll find a door. Behind the door is a Super Missile Tank for the taking. Collect the tank and return through the door. As you make your way back to the left, you will be set upon by not one, but two Alpha Metroids. They will attack you in concert. You must destroy them both before. Do your best to single out whichever Metroid is the closer threat, and focus your attack on them until the other Metroid forces you to divert your attention. The sooner you can reduce the fight to just one Metroid, the less damage you will take overall. Once you have defeated both Metroids, another earthquake will trigger.

Make your way back to the entrance of the site, through lava covered room E, and back to room D. Once there, you will discover that this pool has not receded. It is in fact the lava pool in room A that has dropped this time. Return there to proceed with your mission.

Aside from the Super Missile tank, there are no new items to obtain in the Research Site. However, you now possess the power to obtain two Missile Tanks which you couldn't collect previously. 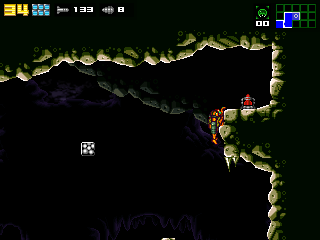 Find this tank in the upper right corner.

Missile Tank A (room H)
Before returning back to room A, take the upper path at the top of room D to access the higher portion of room C. When you're close to the upper right corner of the room, you should spot the closed off narrow passage to the right. Bomb your way in to enter room H. You can technically obtain the Missile Tank in the upper right corner of the room with the Hi-Jump Boots alone, but since you should have the Space Jump, it will be that much easier to simply jump your way to the corner and collect the tank. 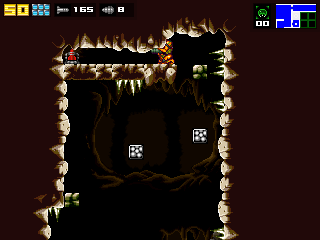 It takes careful Space Jumping to reach this.

Missile Tank B (room J)
After collecting Missile Tank A, continue to make your way to the top and up into room I. Similarly make your way up to the top, and look for the narrow passage off to the right which is blocked by some rocks which you can bomb away. You likely already collected the Missile Tank that was located in the bottom of this room, but now you are ready to collect the one at the top. It can only be reached with the Space Jump. All you need to do is reach the top and grab a hold of the ledge where the tank is resting. However, the spikes on the walls and the quickly dissolving blocks make this a bit challenging. You'll have to keep at it and aim Samus for the very narrow gap in an effort to guide her close enough to the ledge so she can grab on. Once there, you can pull her up and Morph Ball through the narrow passage to the Missile Tank beyond.