Samus' task to eradicate the Metroid menace on SR-388 begins here in this canyon. The early sections of the map are designed to help you become more familiar with Samus' basic abilities, such as shooting diagonally or downward, using the Morph Ball ability to squeeze through narrow pathways, and grabbing hold of ledges from below. Only the simplest enemies are present, and one Metroid must be defeated until more of the planet becomes accessible.

Your ship arrives on the surface of SR-388 in room A of the map above. At any time, you may return to your ship to save your game and refuel on energy and ammunition. A cliff wall prevents you from going left, so head to the right.

The next few rooms are designed to teach you about several basic techniques which you should master, as you will rely upon them for the rest of the game.

Once you reach the bottom, you'll find the first split in the path in room D. You can go to the left or the right. However, if you proceed all the way to the right, you will eventually encounter a pool of lava with no end that will ultimately destroy you. Your only choice at this time is to head to the left. Note that there is a hidden passage along the floor that connects the left and right passages. It is narrow, so you must roll through it using the Morph Ball. 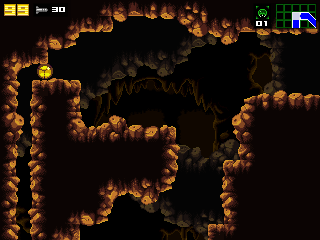 The shortcut in room F.

Run and jump your way up and to the left through room E to reach room F. Once again, you must drop to the bottom of a pit. While you can descend from platform to platform, the room actually provides a hidden shortcut. If you jump over to the ledge on the left across from the entrance, and shrink down to a ball, you will find a narrow shaft which drops all the way down to the floor below. You won't be able to take advantage of this shortcut on your way back up, but it can cut down on the time it takes to reach room G.

Three frogs occupy the wet subterranean cave in room G. Shoot them from afar, or let them hop into the small pools that dot the floor, and jump over them. The door on the left side is red, and you must shoot it open with one missile. Beyond this door is a save station where you can save your progress and restore lost energy.

Continue left to room H Drop down to the floor below, where you will encounter some lava along the ground. Stay out of the lava to avoid taking unnecessary damage. When you get to the left, jump up to the platforms above you. They should be just high enough that you grab the ledges with your hand. With one hand on the ledge, hold forward while pressing Jump to pull Samus up onto the ledge. This is an ability which was introduced in Metroid: Zero Mission as the Power Grab. Unlike in Zero Mission, you begin the game with this ability, it is not something you obtain. Jump up to the next ledge, and then over to the exit on the left. 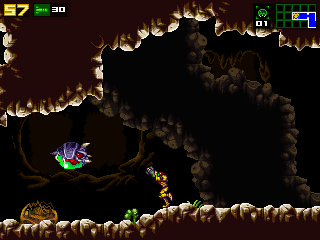 Upon setting foot in this room, the first Metroid encounter will begin, as the larva finishes molting into an Alpha Metroid. Your battle will begin immediately. Switch to missiles as you and the Metroid approach one another. To defeat the Alpha Metroid, you must shoot in its green underbelly with five missiles. All the while, you must preserve the energy you have by avoiding contact at all costs. If the Metroid gets too close and you need more space to fire, jump as high as you can to lure the Metroid higher off the ground, and then be prepared to fire up at it when you land.

Once the Metroid is defeated, the planet will begin to quake. This is an indication that somewhere around the planet, the level of lava has descended, and a new pathway has opened up for Samus to explore. Indeed, if you now travel along the pathway to the right of room D, you will be able to explore further than was previously possible. Make your way back to D, and save your game in the station to the right.