A Kingdom for Keflings

From StrategyWiki, the video game walkthrough and strategy guide wiki
Jump to navigation Jump to search
A Kingdom for Keflings | Table of Contents | Gameplay | Walkthrough 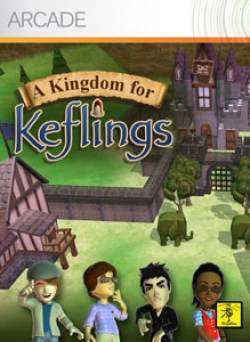 A Kingdom for Keflings is a video game developed by NinjaBee for the Xbox Live Arcade which was released on November 19, 2008. It is the first Xbox 360 title to allow full avatar player control in the New Xbox Experience. The game has been described as having "dashes of SimCity and Black & White", with a resource-gathering system comparable to The Settlers. A Windows version was released on March 30, 2010.

In the game, the player takes on a role as a giant in the land of the Keflings. Keflings are a small race of human-like creatures; similar to elves, half-lings, or gnomes. It becomes the job of the player to aid the Keflings in building their kingdom. This is accomplished by building various buildings, collecting resources, and managing the work of the Keflings. The Keflings will aid the player in gathering resources (wood, wool, magic crystals, and stone) and transporting them to various buildings for use in producing other buildings. Some buildings convert the resources into other products for use in building more complex structures.

The main goal of the game is to complete the castle, thereby producing a King or Queen of the Keflings. The game, however, does not stop, and appears to officially never end, allowing the player to continue building more structures and gather more resources. It is widely assumed that this is due to downloadable content to be released in the future.