Edgeworth has been called to help drop off the ransom to save the son of a man called Ernest Amano. With the money in his new suitcase and Gumshoe watching him from a distance, he arrives at the entrance of Gatewater Land. He is greeted by a mascot called Proto Badger. Noone knows that someone is being held ransom in this park. Suddenly, there is a call from the kidnapper. He or she instructs Edgeworth to move to the stadium.

At the stadium, he is instructed to go to the park's Haunted House. Broken mirrors line the walls and the usual fairground sound effects ring out constantly. A mascot lies at one end of the house's hallway. The kidnapper now instructs Edgeworth to go through the large doors. He is told to leave the money in the house's dining room and leave. But he won't be leaving very soon. Edgeworth decides to stay at the haunted house until the police arrive. Suddenly, the mascot at the back slowly rises. The figure of the Proto Badger slowly sneaks up behind Edgeworth. It holds up a sword and... 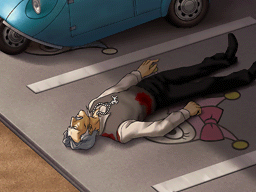 The character you control in this game, Edgeworth is a prosecutor who strives for the truth. He is very intelligent and has very intimidating tactics of interrogation. He tends to be a little of a perfectionist. Due to an incident in his childhood he has a deep fear of earthquakes and elevators.

The butler of the Amano family. He is very close with Lance but disappeared a few days before Lance was kidnapped. Why is he now dead at the very place where Lance was held hostage?

A police officer Edgeworth met at a past case. He aspires to become a detective like Gumshoe.

An old woman who Edgeworth often encounters. She adores members of law enforcement, especially Edgeworth, to his chagrin.

Homicide detective at the local precinct. In charge of the initial investigation.

Father of kidnapped Lance Amano and director of Amano Group. Edgeworth holds a lot of gratitude for him.

The victim of the kidnapping that drew Edgeworth into this case.

A peppy teenager who claims to be the Great Thief Yatagarasu. She seems to know Edgeworth, though Edgeworth doesn't recall meeting her.

An Interpol agent from the Republic of Zheng Fa. He has a strong hatred for prosecutors and the courtroom. He looks after his men really well. Often quotes Lang Zi.

Shi-Long Lang's assistant. She keeps scrolls of Lang Zi quotes as well as information regarding the cases Lang is investigating.

A witness of a case Edgeworth worked on. She is studying to become a forensic scientist.

A former worker of the Amano Group scandal. Where is he now?