From StrategyWiki, the video game walkthrough and strategy guide wiki
(Redirected from Acrobat)
Jump to navigation Jump to search 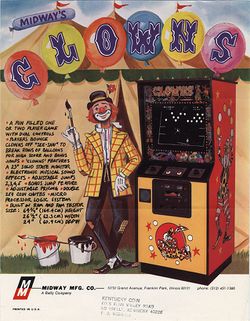 Clowns is an arcade game that was released by Midway Games in 1978; it utilizes an Intel 8080 microprocessor (running at: 1.9968 MHz), and the players must use a rotary controller to move a seesaw at the bottom of the screen left and right, along with a single button to turn it around. The stick-figure "clowns" after which the game is named will first jump down onto the seesaw and get catapulted into the air to burst the balloons that are flying across the top of the screen for points - then, as one of them is falling back down to the bottom of the screen, you will have to position the seesaw under him so that he will land upon it and catapult the other one into the air (if you do not, he'll land on the ground, then get knocked out by the impact, which will cause you to lose a jump). This is one of the first games from Midway that was life-based as opposed to time-based, and you can earn a bonus jump, if you burst enough balloons; it was ported to the Commodore 64 in 1982.