You must be at least level 2 to start this region.

After completing Fillmore's second Act and squeezing as many rewards from the town's populace as is possible, fly the temple over Bloodpool (the area with the large red lake), save and then send your spirit down to wreak havoc as a warrior once again.

Platforms located at the bottom, as well as bridge segments, will fall a few seconds after stepping on them. While the logs will return, the cracked bridge segments will not. 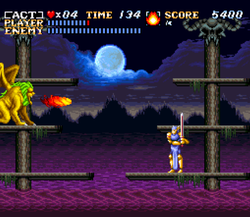 The boss of Bloodpool Act I is the Sphynx, a winged lion-like creature that hops around and spits fireballs. It's relatively easy to kill, since it tries to avoid you rather than pouncing on you. When it hops out of the water on the opposite platform, it should launch a fiery breath. Jump over it and towards the sphinx and attack. When it on the second platform and jumps to the other side, wait until it attacks before chasing it. If you can chase it to the bottom platform where it leaps back into the water, you should be able to get two to three swings in while it's diving.

If you do get killed in the boss fight, the checkpoint returns you to somewhere before the extra life, which you can collect. If desired, you can exploit this to farm points and likewise increase the maximum population cap for the city.

After the completion of Act I, two new citizens will be created to start the colonization of the land. Immediately after taking refuge in the temple, the people will request assistance. 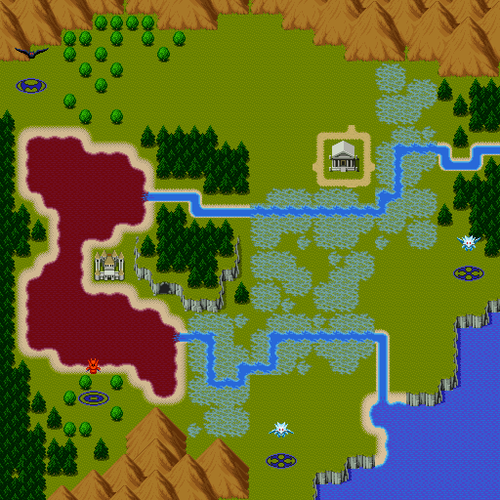 My Master, it has become very difficult trying to build homes because of the marsh lands.

Simply use Sun on the marsh lands to get rid of them.

The people will learn how to grow wheat and offer it to you. The wheat offering never runs out so you can keep taking as much as you like of it. Either head back to Fillmore and use it on a field to teach the people how to grow it as well, or complete construction of a road to Fillmore.

We want to build homes on the other side of the rivers, but don't know how to build bridges.

If you haven't done so already, fly over to Fillmore and take the bridge offering. Head back to Bloodpool and use it.

My Master, our son, Teddy, has run away from home. We have looked everywhere for him, but we cannot find him.

Take the offering of the loaf of bread. Use it, and select the square that Teddy is roaming in (in front of the cave, next to the lake and the castle). He will return and you'll be thanked.

Our son, Teddy, is now back home. The loaf of bread reminded him of home and caused him to return.

Teddy realizes that the lake in Bloodpool is poisoned because of its vicinity to the Red Demon's lair, and the citizens make an offering of a magic skull. Use lightning to the destroy the bushes in the southwest corner of the map, and the Red Demon's lair will become visible. Use the magic skull to seal the lair, and the lake water will become blue. Soon the citizens of Bloodpool will find the Stardust spell and a Source of Magic in the lake and make an offering of them.

…something very dreadful has occurred. A monster appeared from the old castle by the lake and demanded a sacrifice of us.

It's time for the second Act, so save up, head to the Sky Palace and get ready to fight for Teddy's life.

Our people have become bitter and selfish. We have so many quarrels and fights. I'm afraid I worked them too hard in building our town and have caused them too much stress.

You will need to develop Kasandora before you can resolve this issue. Take the Music offering from that region, and use it in Bloodpool.

When the city grows once again, they will be able to provide a compass. 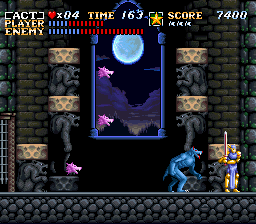 When battling the Wizard, you get two bosses for the price of one. The wizard begins by teleporting randomly around the room, and each time he appears he throws a trio of fireballs. When he is on any of the platforms he will follow up with a triple lightning strike, so avoid standing directly underneath him. Get a couple hits in during the lightning attacks or use the stardust spell to bring his energy down quickly.

After the Wizard's health is reduced by half, he metamorphoses into a werewolf (but not until he completes an attack). In this form he lumbers across the ground until he decides to jump off the walls quickly, and then lands in the center of the room and calls forth three wolf heads. The heads travel in a straight line across the room. His attacks can be hard to avoid, but the werewolf can be quickly dispatched by striking it mercilessly while it's moving slowly on the ground. Once again, the stardust spell can be quite useful.