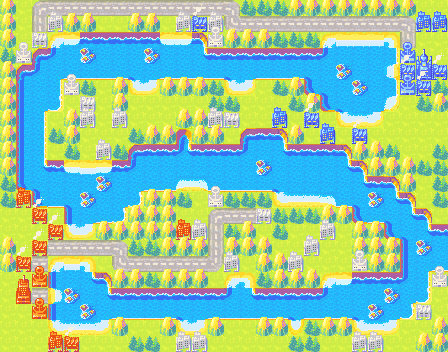 Bounty River is a time-consuming level. A long "river" (actually small channel) weaves its way across the map while one must hop from peninsula to peninsula via the water. Despite the large map and terrible layout, this map is very easy if taken patiently and carefully.

Almost CO here can work fairly well, given the average enemy CO and diverse map, but I decided to use Kanbei. Because the enemy units cannot attack us quickly and often, we can control the pacing of the match. Kanbei packs superior offense and defense, and because we have a fairly large amount of funds available, he works very well in this map.

A recommended skill set to use:

The last skill really is only for an easy rush across the middle peninsula, but many other alternative skills can work here as well. Fire Sale or Gold Rush are great alternatives and will lower Kanbei's high unit prices.

The key things to accomplish:

First few turns are simply centered around capturing the cities/docks on your peninsula. This should be easy as long as you have 3+ APCs constantly shuttling back and forth infantry. As for the bottom strip of land, take it slow and just send 2 infantry to capture the bases at a leisurely pace (Jugger is never going to get down here).

Once you have your peninsula captured, Jugger should probably be working his way near the neutral factory and dock at the peninsula directly above you. Don't worry yet. He cannot get his units across the channel to your side without having to pass the U-bend. That means its time to setup a rocket/artillery defensive position here. Build at least 2 rockets/2 artillery and position them so that it fully covers the water at the U-bend (rockets in front, artillery behind). As long as you have this here, Jugger's landers are going to have some trouble getting to your side.

After doing this, you can start focusing on building up your naval fleet. I would recommend building a submarine first, followed by several landers. In total, you should want at least 2 submarines in order to 2-hit any enemy battleships that Jugger may produce later. These also can do cleanup work on any of his landers.

Once you have a small naval force setup, at this point, Jugger might stupidly still send all his units into landers. This means he should be emptying out his land forces at the central peninsula. As long as he does not have 2+ Neotank/Megatanks at the landing zone directly across your peninsula, you should be fine. Spend a few turns building up a small landing force of at least 2-3 Neotanks, 1-2 artillery/rockets, and some infantry. If you have your SCOP ready now (after all those naval/rocket strikes), I would actually recommend you use it AFTER you land your neotanks. This should basically prevent Jugger from attacking you at all (unless he wants to take your heavy counterattack).

From here on, its simply a matter of moving across the central peninsula and slowly reaching Jugger's HQ. I would advise for the HQ capture win, as Jugger has factories/docks along his northern strip of land, so elimination will be very tedious to complete. If you have quite a lot of funds, you can produce a battleship or two in order to soften up the road for your neotanks.

Once you capture the central factory, you can produce neotanks day after day, and continually rush his HQ.

The estimated completion time heavily varies on how quickly you want to build up your army and rush, but I managed around 32-34 days at a moderate pace. This should earn you a S-rank given you do not take significant casualties on your land forces.