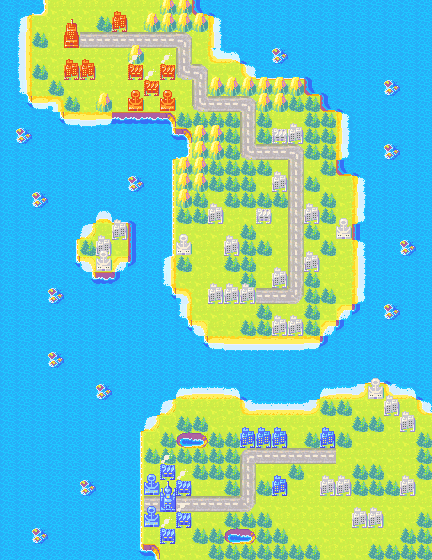 Kita Straight is a fairly large map with two large islands and one small one. Both of the large islands have plenty of cities, some factories, and docks. However, your available neutral cities are quite a distance from your starting zone.

The enemy CO is Sami, the infantry veteran from Orange Star. Interestingly, her choice as a CO here gives you a good advantage as her bonuses and SCOP both are not incredibly influential here.

Being primarily a naval/ground war, Drake is one viable option if you happen to enjoy using him. In addition, since Sami is the opponent CO, using powerful direct offense with a CO such as Max, Kanbei, Grimm, or Jess, is another great option. Because the map is very open ended, many CO's can work well here with good strategy. In this brief walkthrough, I will be using Rachel, a new CO from the Orange Star army. The reason behind this selection was primarily for her SCOP and her all-around versatility.

Most of these are self-explanatory - heavy focus on direct combat, with support from pathfinder in the forested region on Sami's starting island. Star power was selected to quickly get Rachel's SCOP, while backstab was solely chosen for naval supremacy with submarines.

The key points to achieve in Kita Straight are:

On the first turn, and following consecutive ones, I would recommend building one APC + several infantry. Do this until you have around 3 APCs or so. Try to have one APC + infantry to run down toward the first neutral factory, while shuttling infantry back and forth with the other 2 APCs. You usually can take some time spreading the infantry out as the map is very large, and Sami also tends to spend time focusing on capturing as well. After the APCs, build one black boat and shuttle some infantry to the small island with the two cities and dock.

Once you have the factory secured, start building some tanks and artillery for defense. Sami will most likely have a small force ready to land (probably recon/tank/artillery). This is easily managed if you have merely 1-2 tanks. During this period, focus on capturing the remaining neutral bases on your island, while stationing your defensive units along the southern coast to target any landing units.

At this point, now I would recommend building a couple submarines. Sami should have sufficient funds to start building some midtanks/neotanks which can be easily taken care of if their landers are eliminated. Having 2-3 submarines should be sufficient for the rest of the game. Always keep them hidden, and station your APCs along the coast if refueling is needed. When Sami starts building cruisers, do not worry. Because your submarines should OHKO her landers, you can attack without worry.

With a small fleet of submarines, you can start building neotanks/rockets/landers to prepare a landing force. Depending on much time you want to spend during this stage, you can either setup a massive landing force, or a small force, then slowly add to it. I would recommend at least 2-3 neotanks/1-2 rockets + any remaining tanks/artillery from the earlier days. Also drop one APC + infantry unit for the HQ capture.

By now, you should definitely have your SCOP ready from the submarine attacks. I would land in a relatively clear shore, then the next turn, use the Covering Fire SCOP, which should target the factories around Sami's HQ (1-4 hp on most of her units). With this, rush with the neotanks, cover with rockets, and continue to use landers to drop off additional reinforcements.

After a few turns, you should be able to set up an infantry to capture Sami's HQ and win. Elimination of all her units can prove a little tricky as she has a dock at the right end of her island, in addition to any of her cruisers that you may have not touched, so I would recommend a HQ capture.

Estimated time of completion varies quite a lot, but this can be done in 22-24 days. An S-rank is easily achieved with this time, in addition to not losing a significant number of units on the landing.