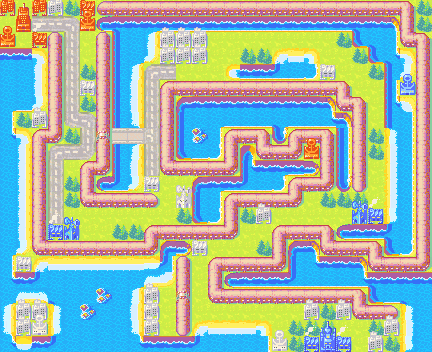 This map is divided by the titular Pipelines into multiple chokepoints/lines of battle, and is primarily concentrated on ground warfare, although there are a few docks, and naval transport will play an important role. Jess benefits from stronger vehicular units under any circumstances, but these benefits are compounded by the 2 Com Towers she controls from the outset, and a third that she will capture early in the game. The first time your units encounter each other, expect to see her tanks dealing yours 8-9 damage and taking 0.

My CO of choice for this map is Hachi, because with his cheaper units it is categorically faster to send your city-capturing squads down the Top and Bottom fronts (meaning faster money generation, and also uncontested captures), and because his SCOP makes it much easier at the endgame to finish your Middle battle, and send an entirely separate army at the HQ zone, from right at the front. Colin's units are even cheaper, which helps with expansion, but their fragility is a deal-breaker against Jess's amped-up tanks.

Although there is some overlap, especially as unit counts increase and pipe seams are destroyed, I will refer to the Top (your eastern dock along the eastern canal, including the 6-city block), Middle (heading south between the two pipes, including the nearest neutral factory), and Bottom (western canal that leads to the southern lake and city/dock island) alleys as separate fronts.

The Top front will not see action until the mid-game, but building a Black Boat with 2 Infantries to capture the 6 cities is an important early step, and - fortunately - this will probably not be contested until after you control all the cities.

The Middle front will be the site of most of the early- and mid-game combat. You need to take the neutral factory, but after that, your priority is just to hold the line until your actions on the Top and Bottom fronts secure economic superiority.

The Bottom front will be similar to the Top, in that you have a lot of room for convenient expansion that will mostly be uncontested. Quickly send a Black Boat with 2 Infantries to capture the Factory on the southern point, and then the city/dock island. You will also want to capture the 3 cities on the mainland, noting that your opposition will likely only be Infantries/Mechs, and that the spot where the shoals next to the neutral factory line up with the shoals by the 3 cities is a land bridge.

By the time you have finished capturing the neutrals on the Top and Bottom fronts, you will be thoroughly embroiled in the Middle conflict, but you should have achieved superior money generation, and that will win the day. You can fight all the way around the Middle Front to the enemy HQ, but after you take the 2 nearby factories and Com Towers, there is little to gain and a lot of ground to cover. Once you control the southern ocean area, it will be substantially faster to either blow up the pipe seam and march, or build Landers, and deliver, fresh units straight to the HQ zone and win.

> Although there are Pipelines everywhere, building Piperunners is entirely unnecessary and possibly counterproductive. Likewise naval units other than Black Boats.
> Whenever you see Jess's SCOP getting close (she seems to only use her SCOP), try to limit its damage by either destroying her direct-combat units or by limiting their movement. Also, she won't use it unless the gauge is full as her turn starts, so avoid those one-last-hit attacks that can supercharge her next turn - instead, delay a turn and hit her with overwhelming force that leaves nothing for her to strike back!

> Turn limit for 100 points: 26 (?). I think.
> Power shouldn't be a problem - not sure of the exact kills-in-one-turn number - because once the momentum goes your way, Jess will be trying to build on multiple fronts, and so won't be able to build powerful units anywhere, and you shouldn't have any trouble knocking a bunch out at once.
> Especially in the early moments of contact, it is easy to lose a bunch of units to her overpowered tanks, Md tanks, and artillery - judicious joining, and careful use of chokepoints can preserve your Technique score.

And finally: YMMV! This thinking worked for me, but I'm sure there are other ways!