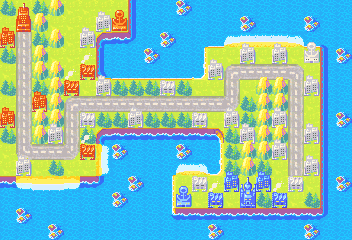 The map itself is linear, with two options to attack Drake's HQ, either down the forested region, or around the road on the other side. This guide will be utilizing a combination of both.

A good CO of choice here is Jess due to her useful ability to resupply all units on her CO power/SCOP, in addition to increasing movement of her vehicular units. Alternatively, you may want to use Rachel, as her SCOP works wonders in maps where enemy units are grouped together in close knit formations. Both CO's share similar strategies, so minor differences between the two are noted.

If you are playing with skills, use the following:

The first two are for effective rushing, while the latter two are "extremely" useful skills for this map, which allow for 1-turn rushes down the forest path, and a nice bonus during Drake's SCOP.

The first few turns are fairly typical: build all infantry, then APC + infantry, then a tank/artillery pair. Key point is to quickly capture the factory at the end of the road, while establishing a defensive position at the forest path. After a few turns, you should have most of the cities captured, and have an artillery (or two) overlooking the forest path/mountains.

During the next few turns, slowly capture the cities/dock around the top bend, while building some rockets to overlook the forest path as well. After building 2-3 rockets, keep the last one stationed on that rightmost factory, and let it continually bombard any units Drake has built on the bottom two factories. Meanwhile, station your artillery at the cities along the mountain. Once you have a superior firing squad set up, start building midtanks and neotanks. Send 1-2 around the top bend, while setting up the others to rush down the forest path (very easy if you have Pathfinder).

Drake probably has had 1 or 2 CO powers by now, as he typically will use them instead of saving for a SCOP. Let your rockets/artillery fire away, but just station your tanks at northern cities if needed. When you have your own SCOP ready, time it with your offensive rush.

If you had Jess here, you probably can obliterate most of Drake's forces within a turn due to the increased attack and movement. If you had used Rachel, most likely all 3 missiles would rain down around Drake's HQ, dropping units to 1-4 hp. This is perfect for her rush as well. In either situation, after this, it should be fairly easy to finish Drake off.

Estimated time of completion is around 16-18 days, with or without skills. An S-rank can be easily achieved as well.