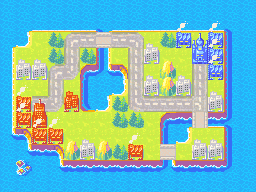 Spann Island is the first and most basic war room map.

Some key things to note are the 3 regions in which you can advance toward the enemy HQ - the top road, central forested region, and the bottom road/island. This leaves quite a lot of tactics and options to approach your enemy, but this guide is primarily rushing the central forested region as it allows for flanks and more maneuvers around the enemy.

The best results come from using Kanbei (although most CO's here can be used quite effectively).

With this setup, you have incredibly high direct offense/defense, and fast movement through the central region.

Because this map is very small, battles are fast paced. Each and every unit is vital and survivability is essential to a quick win. That being said, Kanbei should be quite fitting.

The first turn is fairly standard - build 4 infantry (the factories which are one turn away from neutral cities). Make sure you do not build infantry on inside, bottom right factory! The reason behind this is so that you can build one tank the following turn. On the next turn, every infantry should be able to capture one city with the exception of one, which should just advance toward the right most cities on the island. On day 2, build one tank. This will give you an early advantage in terms of offense. On day 3, start moving your infantry toward the central region and set your tank to continuously attack any of Andy's infantry capturing cities. Finish your turn by building another tank.

From here on, every day, build one tank. If you have enough funds, start diversifying your army by building some anti-airs (better at taking out infantry). Because you are dealing with Kanbei here, his tanks are quite expensive, but the higher quality is worth it in this small map. Also, skip the artillery entirely. No APCs either. Just tanks and anti-airs. Because almost every enemy unit is within 2 turns' range, focus on direct offense.

Essentially, the rest of the strategy is straightfoward - send your tanks/anti-airs to target Andy's tanks, artillery, and infantry (in that order). One key thing to note is that do not get too greedy and start attacking multiple enemy targets. Andy's SCOP repairs all units for +5 hp, which can ruin your efforts if you do not focus on taking out one unit at a time. If you actually keep Andy without any damaged units, he will never use his SCOP (which is what we are going for here).

Also, if you start losing your infantry, just ignore that fact, and still build more tanks. We are swarming Andy here, and with the 3-4 cities you captured early on, you should be in good standing for daily production of tanks/anti-airs.

Once you have your SCOP, unleash the Samurai Spirit, and Andy should be out in no time.

Estimated time of completion should be around 10-12 days. An S-rank should be easily achieved as well.