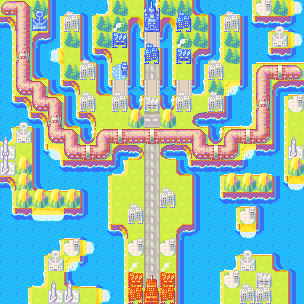 You first may notice how oddly this map is laid out. Key things to note are the central road to the enemy HQ (which is only accessible along that road), and several missile silos stationed at the left side islands.

Because your enemy CO here is Nell (average all around), you can get by with many COs. A good choice is Sami, as most likely, you'll want to win by capturing their HQ (taking out all units along her left/right side factories will be a nuisance as they are only accessibly by air units).

That being said, if you are playing with skills, a good skillset would be:

The first one is essentially just for capturing the HQ, as the overall plan of this strategy is to rush their HQ. Road Rage and Sniper is for clearing out the central road, and Star Power is for fast buildup for Sami's SCOP.

First few turns, build infantry, and only infantry. This allows you to spam transport helicopters the following turns after you capture the two airports. The key goal here is to spread Sami's troops across the islands, especially the missile silo ones. Focus on the left side islands and the right island directly next to your HQ. Nell should take some time clearing the pipe points as she most likely will attack them with a tank and a chopper, both of which will take at least four turns doing.

Once you have infantry on the islands, fire off a few missiles first at her primary offensive units (most likely tanks, anti-airs, and choppers at this point). Don't worry about her capturing cities with her infantry—you want to weaken her stronger units for an easy pushover when rushing with Sami. Save 1–2 missiles on the closest island for later.

By now, station 1–2 artillery, and one anti-air along the middle road, just behind the central pipe joint. These should cover Nell's factory and the road directly in front of it.

Once you have started capturing most of the right most island, single airport island, and left side islands, Nell will probably have broken through the two left pipes. She may, or may not have a fighter jet by now, but don't worry about this. You will not be focusing on air superiority here. As for her chopper(s), they should be quite a nuisance, but if you had built one anti-air earlier, then let her target a transport chopper, and take her out next turn. There are other ways of going about this, but you'll surely be fine.

Once you have almost all the islands captured, and can start rolling in the funds, start building up your rush squad: tanks/antiairs, artillery, and a rocket. Blow through the middle pipe joint, and quickly clear out any infantry and units Nell may have stationed at the middle. Most likely this step should be incredibly easy as long as your previous artillery have bombarded the hell out of that factory. To complete this rush, have on transport chopper drop a infantry/mech in position for the HQ capture. Also, keep a unit stationed on her middle factory (so that she can't produce units there).

Build one missile unit "just in case" as well.

If things happened to go your way so far, most likely your star power should be very near max (if you used skills with Star Power). If not, you'll just need to take an additional turn with the capture.

By now, there are only two possible worries:

The first situation is unpredictable, but if she does happen to build air units, station your missile unit in position to cover your infantry at the HQ. Don't worry about that chopper taking out other units, only protect your infantry! If she has rockets, no worries as well. Your infantry can most likely withstand one barrage with at least 3–4 HP, which is still a two-turn capture as long as you have either Invader (or get lucky with the four HP remaining).

If your SCOP is ready, you win. Auto-capture that HQ and game over. If not, channel all your early-day infantry with transport choppers (you should have maybe 3–4 of them) into that middle road and join units with the capturing HQ infantry.

Estimated time of completion with skills should be around 15–18 days, and around 18–22 without. An S-rank can be achieved as long as you successfully rush the center road without taking heavily casualties doing so.