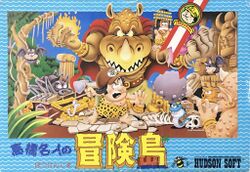 Adventure Island (sometimes referred to as Hudson's Adventure Island) is a game developed for the NES and MSX in 1986. It is known in Japan as Takahashi Meijin no Bouken Jima, which translates to "Master Takahashi's Adventure Island". It was the twelfth best selling Famicom game released in 1986, selling approximately 1,050,000 copies in its lifetime. The North American NES release came in September, 1988, and the game was released as Adventure Island Classic in Europe in 1992. Developed by Hudson Soft, the game was an adaptation of the arcade game Wonder Boy, which was ported to Sega home gaming systems under its original name. Adventure Island would go on to found a successful video game franchise with many sequels.

Adventure Island is not an entirely original creation by Hudson Soft. Hudson licensed the game from a company called Escape (later known as Westone OneBit Entertainment) and that Escape helped Hudson developing Adventure Island. Escape was responsible for developing the arcade version of Wonder Boy. Because Wonder Boy was a game that Escape had created for Sega, the latter company owned the rights to the characters and bosses, and therefore the franchise could not be used as a release for the Famicom or NES. Escape, however, owned the rights to the regular monsters and the game itself. As a result, Hudson changed the sprites, music, and some of the items from Wonder Boy, and renamed the game.

In 2003, the game was updated in high resolution graphics for the PlayStation 2 and Nintendo GameCube as Hudson Selection Volume 4: Takahashi Meijin no Bouken Shima. That same year, Hudson also released a slightly updated version of the game for mobile phones. In 2004, the game was released as part of the second set of the Famicom Mini series for the Game Boy Advance. Adventure Island was naturally included in the 2006 GBA compilation of Adventure Island games known as Hudson Best Collection Vol. 6.