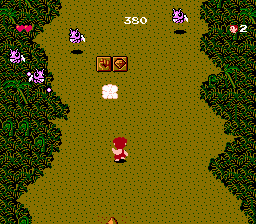 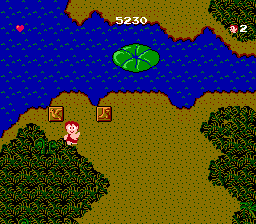 As you might expect, the first stage starts out calmly enough. You are presented with two diamonds and a few basic enemies until the first challenge, a pod of bees, appears to attack you. You start with the weakest weapon, two stones, and you will have an opportunity to power up just before the bees arrive. Don't miss the opportunity, but don't put yourself in danger of getting hit or you will just go back to throwing stones. Look for a hidden wing tile just before the first appearance of water. It will help you, although the single lily pad jump shouldn't pose a huge challenge. 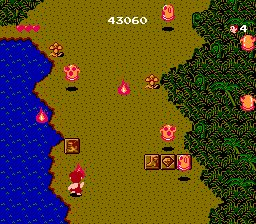 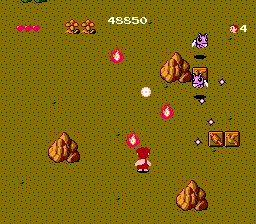 The first of three hidden Riki tiles appears right after the lily pad jump. The flowers on the right will distract you from noticing the invisible patch of ground that absorbs your shots. Becoming Dino Riki in this stage can be useful, and can be used in conjunction with the wing tiles, giving you the best of both worlds if you're not confident about jumping from lily pad to lily pad. Further along in the field, there are a number of hidden tiles, including not one, but two wing tiles. Beginners will definitely want to make use of these in the upcoming section. 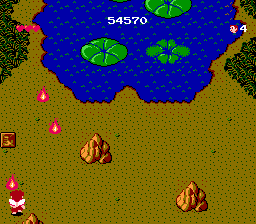 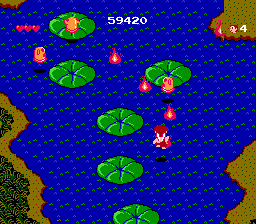 Just before you reach the first long stretch of water, you can find the second of three hidden Riki tiles to the left. If you have the wings, you can press the jump button and hold it down to float above the water for as long as you like, as long as you are not hit by an enemy. Enemies will not appear for some time until you are well into the water. Even though the lily pads are oval, thing of them as rectangles. If they are relatively close to one another, you can simply walk from one pad to the next without jumping. It is important to note that if you plan to remain on a particular pad, you must continuously adjust your position while the screen is scrolling. 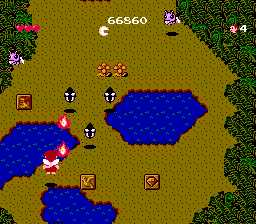 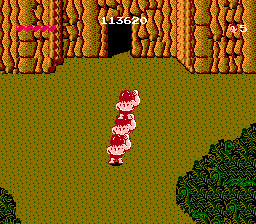 The third and final Riki tile appears between the two long lily pad sections. Grab it if you can, and use it in conjunction with the wings. The next stretch of lily pads including floating islands that cross back and forth along the water. Again, if you plan on remaining on these islands, you must walk along with them, as your position is not adjusted automatically. Once you reach the other side, it's a short distance to the cave at the end of the stage. If you are still Riki by this time, you will return to normal once you are inside, but you will have the flame weapon, which is just as good. 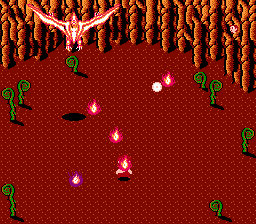 The boss of stage 1 is a flame spitting Pterodactyl. He bobs around the back of the room in a figure eight. If you have the flame weapon, you can defeat him effortlessly by standing in the back of the room and allowing the flames to fan out and strike him where ever he goes. If you have any other weapon, you'll need to track him a bit more. Beware of the fireballs that the Pterodactyl spits at you. If you are firing constantly enough, your weapons should intercept the fireballs before they reach you and neutralize them.