Age of Empires II: The Age of Kings

From StrategyWiki, the video game walkthrough and strategy guide wiki
Jump to navigation Jump to search
Age of Empires II: The Age of Kings | Table of Contents | Gameplay | Walkthrough 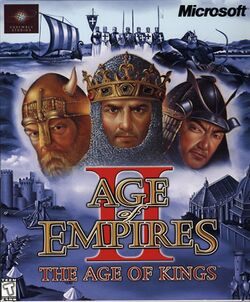 For the Nintendo DS game, see Age of Empires: The Age of Kings.

The Age of Kings is set in the Middle Ages and contains thirteen playable civilizations. Players aim to gather resources, which they use to build towns, create armies, and ultimately defeat their enemies. There are five historically-based campaigns, which constrict the player to specialized and story-backed conditions. There are three additional single player game modes, and multiplayer is supported. Despite using the same game engine and similar code to its predecessor, development of The Age of Kings took a year longer than expected, forcing Ensemble Studios to release Age of Empires: The Rise of Rome in 1998 instead. The design team focused on resolving significant issues in Age of Empires, but noted on release that some problems remained.

The Age of Kings focuses on building towns, gathering resources, creating armies, and destroying enemy units and buildings. Players conquer rival towns and empires as they advance their own civilization through four "Ages": the Dark Age, the Feudal Age, the Castle Age (The Middle Age), and the Imperial Age, reminiscent of the Renaissance—a 1000-year timeframe. Progressing to a new Age unlocks new units, structures and technologies, but players must pay a sum of resources and construct certain buildings before advancing.