Age of Empires II: The Conquerors/Hastings 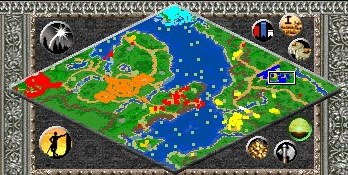 The map depics roughly the area of the English Channel, the southeastern part of England and the European coast between Normandy and Norway (however between Belgium and Norway it becomes quite unrealistic). You start at a place situated approximately in Belgium.

On your continent, the yellow enemy (Harold's Raiders) is scattered around in all directions, but they do not attack, you can chew them up group by group later on as you see fit, no need to worry. What you do need to watch are landing parties of the red enemy (Saxon Navy) that will land around Calais and try to reach your town center. They usually consist of a bunch of 2-Hand-Swordsmen, Huskarls and Rams, so it is best to keep a couple of knights on standby. Any defensive buildings are way too expensive, given your small stone budget and the long coastline, so just let them come to you. Apart from that, it is best to just rake in resources and develop properly. You will need good knights, but everything else is not that important, just a bunch of archer cavalry against spearmen might come handy, but you can even use the fully developed Paladins to break through gates and raze towers and castles. So leave away any expensive techs that are not needed for knights. There is no stone in your vicinity and not much gold (no way to trade anyhow either), so you need to expand your farming business so you can sell lots of food. Your town walls are more of a hindrance than of any real value, so you might want to delete them right away.

Meanwhile you will see the Vikings start their invasion, and they will offer alliance to you. The hints and the message are written in a way to raise your suspicion whether the Vikings might become a problem for you later on, but that is misleading. So ally with them, and you gain not only some map knowledge, but also, after their weak invasion party is wiped out, all viking Berserks including Hardrada himself and a couple of Dragon boats will join your ranks. When you send a transport ship towards them, you will also be rewarded with some tributes.

If you maintain these Dragon boats properly, this might be enough to fend off any naval attacks and eventually destroy their harbors, so there is no need to invest heavily in naval upgrades.

Send your Villagers to build a Mill in the Southwest of your town, then gather berries. Train other Villagers and send them mining gold and chopping wood.

Take a Villager and go with William on the sea shore to build a Port (you'd better go West just after the end of the cliffs as there are a group of Harold Raiders' Huskarls more South).

Build a Transport Ship and take William to the northern corner of the map to make an ally of Harald Hardraade (cyan) and receive a tribute of gold and food from him. With this tribute, you should be able to advance to the Imperial Age.

Bring back your Transport Ship near your port and board 1-4 Villagers, then sail to the center of the map and disembark there. You should find a small camp to the West, containing two Archery Ranges, a Barracks and a Blacksmith belonging to Harold the Saxon (orange).

Build Gates at the four entrances (you do not need to finish them). Gates are better than Walls because enemies will not attack them.

Build a Market in your town and buy stone to build a Castle in the small camp you've discovered, then build Trebuchets in this Castle.

Destroy Harold's Castle to the Southwest with your Trebuchets to win the mission.