Age of Empires II: The Conquerors/Kyoto 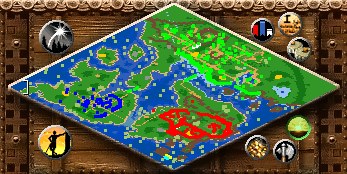 You start in Kyoto with 4 Samurai that have to protect Nobunaga. All of them will soon be killed...

After that, the missions are updated and you are said to build a base. Five ships are in the southern corner of the map, 2 Fire Ships belonging to you and 3 Transport Ships from Nobunaga. Two of these Transport Ships will go near Osaka (red) and disembark 2 Knights, 3 Hand Cannoners and 4 Samurai.

Bring your Knights close to Osaka's walls to the North. It will make the third Transport Ship bring 2 Petards that will destroy a part of the wall.

Take your Knights inside Osaka and attack a gold miner nearby, without killing him. It will make him flee to the North though a Gate. Pass the gate with him and continue to the North, you'll find a Town center that will be converted to your colour.

Create Villagers and make them gather stone in the eastern Quarry. Send also one build a Port on the beach where you first landed and build two Transport Ships. While they get constructed, bring the two Fire Ships near.

Take your Knights to the West of Osaka. You'll discover 4 Bombard Cannons that will join your army. As soon as you have 7 Villagers, embark them on a Transport Ship and put the rest of your troops on it and the other one.

You are going to build one or two Castles, so you'll need 650 or 1,300 stone to do this. If you haven't go enough, building a Market to buy more is an option.

Head to the eastern Kyoto's (green) Castle with your Fire Ships followed by your Transport Ships. Follow the shore opposite of the Castle to avoid its arrows as much as possible and disembark your troops inside Kyoto's city walls.

Send your Villagers build a Castle to the North-West, just after the little forest. It will be attacked by Kyoto's troops, Rams and Trebuchets. Garrison your Villagers and soldiers to get rid of the enemy troops an use your Bombard Cannons to destroy the Trebuchets as they are under cover near the Castles. When the area around your Castle is somewhat clean, destroy the Castles with your Bombard Cannons.

Some enemy warships may try to destroy your Bombard Cannons as they try to aim at the Castle on the other side of the river. If this is the case, build a Castle next to the water to clean the place.