Age of Empires II: The Conquerors/Lepanto

You also have 16 villagers and a fleet of ships, as well as some catapults. 5 of your ships are Cannon Galleons. Try to keep them alive, as you may need them to demolish enemy towers.

There is a Greek village on the same continent as you. They are neutral, and should not bother you - provided you do not bother them. 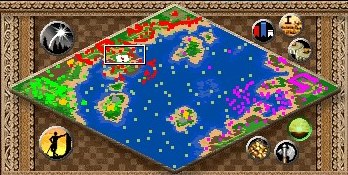 You could task 1-2 villagers to work on the wonder at this point. But you don't really need to start building it yet.

You DO need to setup defenses, and gather resources so you can defend yourself effectively when the Turks send in transports.

Send six villagers to chop wood (you need the lumber). Four go to mine gold. That leaves six villagers. Send two of them to work on farms at your Town Center. The other four quickly build walls along your coastline.

There is no need to build walls outside of your encampment at this time. The Turks rarely land there.

It is recommended that you build stone walls along the coastline within your encampment. There are some strong arguments for palisade walls. But they go down quickly under fire from Bombard Cannons.

Regardless of your decision, prioritize walling off the coast near your wonder. Perhaps leave gates near your docks, to help with future repairs.

A few minutes into the scenario the Turkish Navy attacks you. If you use your available ships effectively you should be able to win this battle.

-Your Fire ships are particularly effective against enemy Galleons, at close-range.

-Your Galleons can draw enemy fire away from your fire ships.

-Your ships can attempt to lure enemy vessels into range of your towers.

After the battle is over, check on your Cannon Galleons. If they were destroyed, perform the necessary research and build more, as soon as you are able. Depending on the difficulty you may need some Cannon Galleons to clear the way for your villages to build walls along some of your coastline.

In this scenario the main obstacle to your victory is enemy transports, which have a habit of landing on one part of the map, while your attention is focused elsewhere. Enemy Cannon Galleons may also be problematic.

Therefore, it is recommended that you optimize your defense accordingly. Build a lot of Demolition ships, and a few Fire ships.

Line the demolition ships along your coast in pairs. Defensive Stance is recommended.

Be sure you have a few extra demolition ships nearby, since they will frequently blow up non-transport enemy vessels, resulting in holes in your lines.

Don't be afraid to pull ships from adjacent sectors to stop transports heading for a hole.

Despite all your precautions there will likely be times when the Turks will decoy your attention, decoy your demolition ships away, and land on your shores.

If your coastline wall is complete, your demolition ships and catapults should be able to kill the Turkish units.

If your wall in the landing area is incomplete, recruit some cavalry to attempt to defend your base. Send in demolition ships if the enemy units are still on the coastline.

You need to deal with this attack quickly otherwise the Turks will land more troops on your coastline, and crash through your defenses.

It is possible to win the scenario (including on hard mode) without building any land troops or diligently destroying every transport. At the very beginning, send half or so of the original villagers to build palisade walls along the entire coastline. Make sure to build as close to the water as possible so that troops cannot land. You should use the F3 pause button repeatedly to optimize your villagers. There is one main area that you can't wall off perfectly: the shallows to the southwest of the wonder. With the wall, the small shallows limit how many troops can land and you can probably take them out easily with your siege onagers, galleons, and maybe a demolition ship if needed. Alternatively, you can try to stuff siege onagers or other troops in the shallows on the other side of the wall so there is no room for transports to unload. 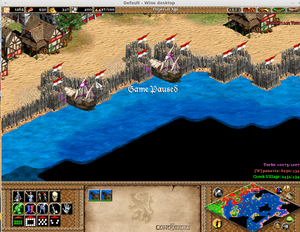 The remaining villagers can build the wonder. Be sure to make more villagers at the town center to chop wood and farm. Once the wall-builders and wonder-builders are done they can mine gold.

Depending on how quickly you can build the wall, you may need to use your demolition ships to take out the first wave of transports. Once you finish the wall (I built all the way to the Greek gate, and eventually down the entire coast although that was probably overkill), you don't have to worry much about destroying the transports. Continue building fast fire ships, galleons, and a few demolition ships, and keep an eye on the shallows area, and you should be fine. Your fleet is needed to take out the Turkish galleon and cannon galleon escorts so they don't get close enough to attack your wall. But this isn't usually a problem since they will stop to attack your ships instead of going immediately for your coastline like the transports.