Age of Empires II: The Conquerors/Manzikert

This scenario is one of those levels where you get no villagers, and hence, no base management at all. You still do have the ability to create units and there are a few twists, but it's mostly straightforward.

The scenario is not hard at all, there's only one real enemy and it tends to play a mostly defensive game. That being said, it is pretty long winded, as your tributaries take time to gather resources and don't give too much with each tribute. Most of this level is won by smart unit choices rather than by strategy. 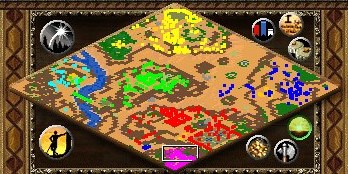 You start with a sizable army consisting of all sorts of units. There are light cavalry, cavalry archers, camels and long swordsmen. The cavalry archers and light cavalry will serve you the best, while the camels can help as a stronger melee unit. Keep them away from any serious raids or charges though! The long swordsmen are predictably the weakest part of your army, but don't disband them yet, just keep them at your town for now.

Get all the light cavalry grouped together, the cavalry archers grouped together, and set out. Immediately, you notice a Byzantine scout tower with three cataphracts under it. Cataphracts are special horsed units that are way more effective against infantry than regular cavalry, and they're also more resistant to anti cavalry attacks, like the ones from pikemen or camels. But they're susceptible to arrow fire. This makes it clear that the unit of choice against them is cavalry archers backed up by melee horsed units, and it's what we're going to use for most of this scenario.

Once this encounter is done, we can start thinking about capturing the themes of Byzantine.

Take your light cavalry and start exploring around. You will notice that the theme closest to you, Cappadocia, has gates and towers to defend themselves. Since you're in the Castle Age and don't really have any castle yet, this suggests making a few rams to take them down. But hold off for now! Rams take up lots of resources and if you get surprised by Cappadocia's defenders, you will have wasted a bunch of gold and wood, which is really bad this early into the level. Besides, it doesn't hurt to scout a bit more yet. Cappadocia's towers are not much of a threat really, even though they have lots of them overlooking the area. Just ignore them and keep scouting.

You will soon run into Pisidia's south entrance, which is gated off too. Your scouts may have also noticed with their sight range that Cappadocia has atleast one more gate inside, which hints that rams are probably a bad idea for this. If you choose to scout Cappadocia's perimeter, you'll find that their second entrance, which faces north east, seems to be just as formidably walled and gated off. Clearly you need to find another target.

Scouting Pisidia's perimeter will reveal that there's a small Byzantine encampment roughly in the middle of the map. So long as you don't pick any fights and stick as close to Pisidia's cliffs as possible while moving, the Byzantines should not be able to do anything to your light cavalry.

Eventually you find that Pisidia has a mangonel near its northernmost gate that can be baited into opening it, as well as a hole in their perimeter. This is your cue, get in and immediately rush towards the flagged area. Remember that you don't have to actually fight Pisidia's forces, which is good because they're too strong for your army at this point. Once you get there, Pisidia surrenders and becomes your ally.

The Byzantines are obviously not pleased with this turn of events. After capturing Pisidia, you need to quickly get some units fast and rush them back towards your town. Byzantine will be coming with a counter attack that consists of cataphracts, pikemen, longswordsmen and rams. Sometimes they send a few monks too. Cavalry archers kill most of their army as long as you keep micromanaging them, and light cavalry should break up their rams, with everyone else helping wherever they can.

If they happen to send monks, be wary as for some reason, these monks seem to convert faster than normal. Just get the light cavalry to kill them off first, especially if they're marching behind the Byzantine troops.

Curiously, if the Byzantines manage to convert a building or so in your town, attacking it seems to make them send another counter attack, albeit a far smaller one. This is nothing to worry about, you already know how to cut them down fast.

At this point, you'll also notice that none of the other themes actually seem to send troops of their own. Byzantine will completely give up attacking once their counter attack has been crushed, and they will mostly stick to their base and their small centre camp. This gives you a lot of breathing room, and you can now turn your attention to building up and upgrading your army while planning to capture the other two themes.

Shortly after capturing Pisidia, you may have noticed a bunch of light blue structures being revealed on your minimap. These are certainly not the colours of any theme, nor of Byzantine. This is a Saracen encampment, and looking at that part of the map triggers a side objective to destroy their towers so that Pisidia can mine more gold.

Now the Saracen encampment is pathetic. All they really have for the offensive is a scout, and towers are not really a big threat to your army. They do have a bunch of military production buildings, but close observation reveals that they're just for show, and either way, it's the towers that need to be dealt with.

You probably didn't do this earlier since you had to prepare for the Byzantine counter attack, but now you can choose to do this early with rams, or later with trebuchets. The only trick here is that one tower is inaccessible by foot, but a mangonel can break it easily. Doing this early lets Pisidia mine longer, but there's not a big consequence to delaying this later as you effectively have infinite gold through market trade, and you'll have tons of every resource except stone before long.

We can now choose to capture either Galatia, or Cappadocia. Scouting will reveal that Galatia has one entrance, but it's very well guarded, with two castles on either cliff, swordsmen in front of the gate, and scorpions firing behind it.

Galatia's entrance looks scary, but frankly I prefer attacking it because most of its security can be easily subverted and once you know what you're doing, it goes a lot faster than a siege on Cappadocia.

Remember that we're in the Castle Age and we don't have a castle yet, so any siege weapon we send needs to stay away from melee attackers while working at close ranges. This means that the swordsmen go first. Just position your cavalry archers nearby, lure the swordsmen with your light cavalry while avoiding most of the castles' fire, and let the archers smash them. Afterwards, send four rams straight to the gate, taking care to reduce exposure to castle fire on their path. They will be bombarded by all sorts of nasty things from behind the gate, but once the gate is gone they've served their purpose. Rush a decent number of light cavalry to Galatia's flag. They will take heavy losses, but it doesn't matter: you're going to get healing and access to monks very soon.

If you choose to capture Cappadocia first, send two rams with a bunch of troops to support. It's not hard, just takes longer considering that Cappadocia has two or more gates on either entrance and the towers are not very pleasant to stay around.

Capturing Galatia gets you to the Imperial Age and gives you three castles and a monastery, among other things. This is a big game changer. Your army will easily dominate the field and you finally have long range artillery to seriously deal with any fortification. Monks are not as useful here since everyone else has Heresy researched, but you can make a few for some quick healing.

At this point, this is very easy to do. Cavalry Archers destroy most of their army while hussars break up the rams sent to destroy your trebuchets or distract your archers. Get a sizable army, smash down their fortifications, have massed archers kill armies, massed hussars kill rams, rinse, repeat. The only things which might give you trouble at this point are monks, but massed archers kill them fast as long as you spot and react to them. It might be prudent to research Faith(makes it harder for monks to convert your units) and Heresy(kills units upon conversion) but it's not necessary.

Once Byzantine's walls and defenses have fallen, rush your troops in and focus on the town center. Have your archer units kill any stragglers in between. Once it's fallen, hunt down every villager and then destroy the rest of the production buildings, starting with the monastery. Byzantine is adamant and won't resign on its own, so it will take a while but they're merely delaying your inevitable victory.