Age of Empires II: The Conquerors/Vindlandsaga 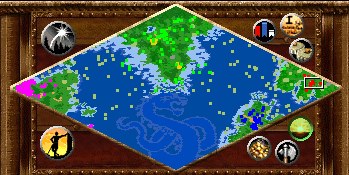 There are three other factions - the British, Greenland and the Skraelings in the New World (represented by the Celts due to the lack of any North American native civilization in the game). The British are primarily for raiding for resources, but Greenland is formidable and the Skraelings can end your mission real fast if you aren't ready for them.

The mission goals seem easy enough, but there are several complicating factors. First and foremost, you are on a fairly tight resource budget with little stone and no gold mines whatsoever. The second is that you can't sail directly across the North Atlantic (including hugging the Greenland coast) because your ships will sink. The third is that Greenland itself does not like you and has relatively lavish resources.

The trick here is that your mission objectives do not require you to defeat Greenland. It can be done, but there is a much easier way that is a much better fit for your resource budget.

You have a small settlement in Norway. Some versions of AoK:C include a starting Castle, some don't. You have some villagers, two Berserks and Erik the Red, who is a Berserk with nine times the health. Your island contains a few camps of deer, some trees and a stone mine. The ocean is fortunately rich with fish, which will greatly ease your food issues.

Use your Berserks to remove the wolf population and get your villagers to work. Build your town inland so that Greenland's longboats don't grief you. If your version doesn't include the castle, you'll ultimately want one on the coast overwatching your docks and in front of your town.

Your greatest initial threat is actually the King of the Wolves, who can one-shot a Berserk. He is triggered by building a Blacksmith. Ring your town bell and kite him into your arrow fire, there's no other particularly good way to take him down.

Remember your goals and your relatively tight budget. The main thing you will need is the Castle Age, stone to build a second castle, and Murder Holes. Don't build an elaborate army or a ton of villagers, you have no real use for either.

Build a market so you have some way of acquiring gold once you spend your initial budget on the Castle Age.

Britain is almost as resource poor as you, with zero stone but more trees. They also have markets which you can sack for gold. Their army is limited to a handful of archers and some watchtowers. Once you reach the Castle Age, send a couple transports worth of Berserks over and sack the markets. You'll receive all the gold you're going to get outside your own market. You can relocate to Britain if you like, but it's not necessary.

Greenland has three things to worry about. They have a well-developed base with castles and guard towers. They have a sizable army - not big, but they have the resources to rebuild it while you really don't. And they have roving Longboats which police the North Sea.

The best way to do this is to follow Erik the Red's vow and walk across the southern edge of Greenland. You'll need Erik the Red, several villagers, and a couple squads of Berserks. Cavalry and archers aren't necessary. You also need to already have 650 stone and several hundred wood banked.

Escort your transports with a couple of your own Longboats, and land as far south as possible without going into the mass of discolored water that is the Sea of Worms south of Greenland. Head west, taking out a couple of Greenland towers and anyone who comes down to interfere. Build a dock as quickly as possible on the west coast, and then another group of transports. Load everyone up and sail southwest.

If you want to destroy Greenland instead, you will need a population capped army and several battering rams to deal with their castles. This is very difficult to afford and requires pretty good execution; a failed attack will basically be the end of you because you have no budget to try again. If you do beat them, they'll briefly ally with you and reveal the map before resigning.

Once you land, get your villagers to work and get a Castle up on the first suitable land you find. The Skraelings will continuously rush you with Woad Raiders and Militia, which your Castle just disposes of. Garrison Erik if you're really worried about him and get to work building your town under your Castle's watchful gaze. Congratulations, you've beaten Columbus and changed world history.

Send your Villagers to the South and build a Mill near the Deers, then chase them for food. You can also fish nearby.

Train as many Villagers as possible and make them build a Lumber Camp near trees and a Port. You need to get 500 food to reach Feudal Age, then you can send all your Villagers chop wood.

When you've reached Feudal Age, build a Transport Ship and board Erik and 4 Villagers. Continue to chop wood with the remaining Villagers.

Sail to the center of the map. Do not go too much South or West, because you're going to be sunk by sea worms. Disembark just after getting the warning about sea worms (you should have just passed a small icy island).

Head quickly west, letting Erik go first to take the arrows of Greenland's Guard Towers, then build a Port when you are out of their reach.

Build another Transport Ship and board Erik and the Villagers, then sail West.

As you reach the New World, disembark only the Villagers and build a Market, 12 Houses and a Town Center (you have to destroy the scandinavian Town Center prior to build another one, to destroy it, select it and press the Delete key).

When everything is built, disembark Erik. After a few seconds you'll win the mission.