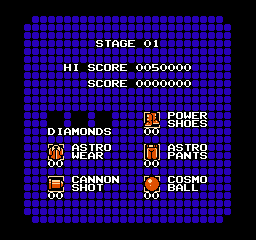 You control Nicol, a young genius who developed the technology to transport equipment across dimensions of space. Nicol is no natural born warrior, but he is handy with a laser gun, and possesses great courage when faced with danger. He is determined to do whatever it takes to rescue his girlfriend Stella, and he'll have to transport himself across seven dimensions in order to reach the region where Stella is being held. Each time, he'll need to stop and collect three diamond crystals to power his trans-dimensional space ship that will get him closer to his intended location.

News about this discovery spread throughout the galaxy, and now a menacing threat from a distant star system is determined to get their hands on that technology for their own purposes. To do that, a demon has kidnapped Nicol's girlfriend Stella, and is holding her captive until he gets the technology. She waits helplessly behind the final boss' chamber in the seventh stage, never giving up hope that her true love Nicol will come to save her.