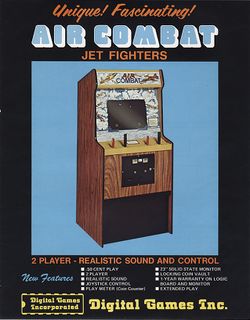 Air Combat (not to be confused with Namco's 1992 combat flight simulator of the same name), is a versus shooter arcade game that was released by Digital Games Inc. in 1976; the players must use two eightway joysticks, one for moving and one for firing, to try and shoot each other down as many times as possible, before the game timer runs out. Whoever has the highest score at the end wins - but if either player reaches a preset score, the game time will get extended for a few extra seconds.