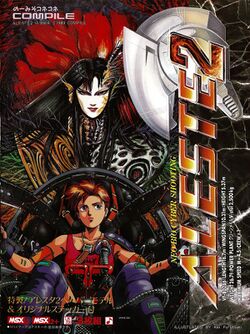 Aleste 2 (アレスタ2, Aresuta Tsu?) is a vertical scrolling shooter video game developed and released by Compile for the MSX2 in 1989 exclusively in Japan. It is a sequel to Aleste and is the first game in the Aleste series to feature the recurring series heroine Ellinor who later appeared in Musha Aleste. Aleste 2, along with other Compile shooters, was also released for the now-defunct WOOMB service. In 2009, ProjectEGG released the game digitally for Windows, also in English.

The game takes place in the year 2039, two decades after the supercomputer DIA 51 attacked and decimated the Earth. After the long restoration period, Earth is invaded by a race of alien plantlike humanoids called the Vagand, intent on finding a new food source on Earth. In their first attack on Earth, the Vagand destroy an Earth space cruiser commanded by the previous Earth hero, Ray Waizen. Their plan to invade Earth is challenged by the newest version of the Aleste piloted by the daughter of Ray and Yuri Waizen, Ellinor, who has vowed to avenge her father's death and to personally kill the Vagand leader Gaizel.