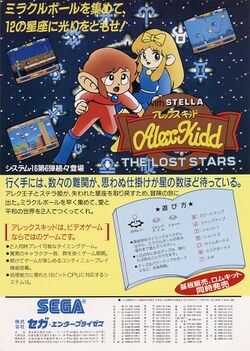 Alex Kidd: The Lost Stars (アレックスキッド ザ・ロストスターズ, Arekkusu Kiddo Za Rosuto Sutāzu?) is a platform arcade game released by Sega on December 10, 1986. It was ported to the Master System on February 1, 1988. It was also released on the Wii Virtual Console in North America on March 9, 2009, and in the PAL regions on April 17, 2009. It is the second game in the series.

Alex Kidd: The Lost Stars features Alex Kidd and Stella searching for the twelve Zodiac signs. Alex's mission is to run through each level, knocking down enemies, and obtain the six miracle balls. These balls are hidden inside such unusual places as a Christmas present, the Fantasy Zone ship out of action, a pumpkin, a clamshell, a golden egg, and a desk bell. Levels include Toy World, Machine World, World of Make Believe, Water World, Monster World, and Giant's Body.

Once the six miracle balls are obtained, Alex must then venture in outer space to carry them to the holy land of Ziggurat. After the last level, the Shrine of Jiggarat, is complete, the player must run through all the levels again, but with new enemies. The player is under a time limit, and if the time expires, the player will lose a life.

The game is noteworthy for the scream Alex lets out whenever he gets hit, falls, or loses all his time.