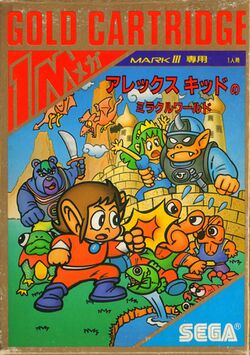 Alex Kidd in Miracle World (アレックスキッドのミラクルワールド, Arekkusu Kiddo no Mirakuru Wārudo?) is a platform video game for the Master System. It was released in Japan on November 1, 1986, followed by the United States in December 1986, with Europe in September 1987, plus South Korea in October 1988, and Brazil in 1989. It was later built into many Master System and Master System II consoles. A remake by Merge Games and Jankenteam, titled Alex Kidd in Miracle World DX, was released on June 22, 2021.

A young martial artist named Alex Kidd learns of a villain named Janken the Great who has defeated King Thunder of the city of Radaxian and who has kidnapped his son, Prince Egle (or 'Igul'), and Egle's fiancée Princess Lora. Discovering that he is the lost son of King Thunder, Alex sets out to rescue the kingdom. On his quest, he defeats Janken's henchmen and retrieves various items which lead him toward Janken whom he defeats and sees turned to stone. Alex retrieves the crown, and the people of Radaxian are restored under the newly crowned King Egle.

Alex Kidd in Miracle World is a 2D platform game. The player must finish levels and overcome obstacles and puzzles in both scrolling and single-screen environments. Throughout the 17 stages, Alex faces many monsters and the three henchmen of Janken the Great, before facing Janken himself.

Alex's punching ability is used to destroy enemies and to break rocks in order to access new paths and to collect items such as money which can then be used to purchase other items including vehicles such as motorbikes and helicopters. At the end of many stages, Alex plays jan-ken-pon (rock-paper-scissors) with one of Janken's henchmen. Alex dies with one hit, or by losing a game of rock, paper, scissors.

The game has no save system, but by holding the directional pad up and pressing the 2 button eight times at the Game Over screen, the player will restart the level with three new lives, at a cost of 400 Baums (the in-game currency).