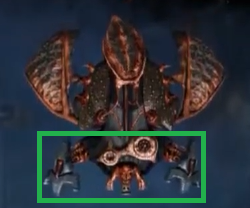 The introductory mission, only Missiles and Homing Missiles are available here, and this is the only mission where the first level is not a Transport only level.

The first phase of the boss is where it attacks 3 shots in both arms and 2 shots on its mouth, once an arm its broken, the mouth will start shooting large blue bullets into your ship, once the mouth is broken the attack speed of the remaining arm will fire even faster before the boss is finally defeated. 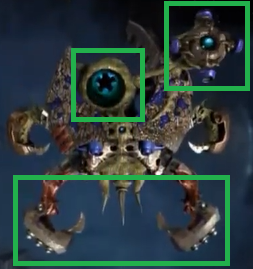 This level introduces some of the other weapons in the game, notably the Bot Launcher and the Sticky Mine, this mission also starts with a Transport-only level, which other succeeding missions will also follow, slight difficulty increase is observed but no new aliens will be introduced yet.

The first phase of the boss is where it shoots triple shots from both of its claws, double shots in the mouth, and 1 shots in 5 directions from its spinning cannon on the back, the claws can be damaged and when one of the claws are destroyed, the spinning cannon will be active, once the spinning cannon is destroyed and both claws are destroyed as well, a big cannon from its left side will open up and fire large blue bullets into your ship, this big cannon is the last boss part that can be damaged and after shooting it a few more times, the boss will be defeated. 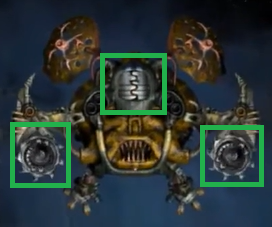 This mission is where you will experience the first difficulty spike as Transports for example have increased attack speed, and Fighters are also slightly more aggressive, and the Medium variation of Smashers will start appearing, but nonetheless this mission shouldn't give much trouble.

The first phase of this boss is where it shoots saws at you and it fires 5 shots in a spread out motion from its back cannon and shoots a Compression-like Bomb which the Demolisher does, when one of the saw shooters are destroyed, its 2 unhittable small cannons at the back will be active, when both of the saw shooters are destroyed, the 2 unhittable back cannons will have slightly faster firing speed, the cannon with a door that fires spread shots and Demolisher bomb will be the last boss target that can be damaged and once its destroyed, the boss will be destroyed too. 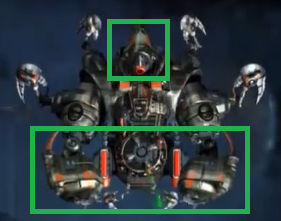 This mission is where Demolishers will become even more common, and Transports once again have increased attack speed.

The first phase of this boss is where it fires single shots in many different directions with its spinning cannon, the arms will fire orange bullets directly at your ship and the boss will shoot out lasers with an indicator nearby which will say when it is about to fire, once an arm is destroyed, the back cannon that isn't firing earlier will starting single shots in an angular motion with fast attack speed but with delays, once the rest of the parts are destroyed, the back cannon will continuously fire without delays and this will be the last remaining boss part, destroy it to defeat the boss. 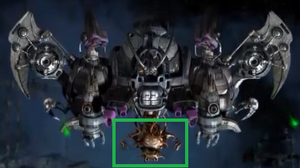 This mission acts as some sort of a tutorial and a demonstration to show you how good Sticky Mines are, and you could get up to 99 Sticky Mines as long as you don't get anything else, enjoy the abundance of Sticky Mines here and learn how effective they are for yourself, this mission also has a rare chance of dropping the Triple shot power-up and once you do get it, make sure you don't accidently downgrade, Medium Fighters will be introduced, and this mission will also feature a slightly altered formation of Transport-only levels which other succeeding missions will follow, Builders will also appear here 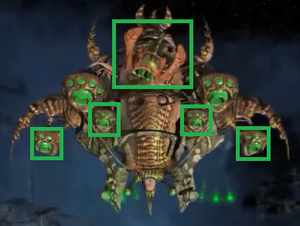 This mission introduces Transport-only levels where Transports will now starting moving even faster, but they won't fire yet, which other succeeding missions will also have, this is where Builders will also become more common, Razers are introduced, and Laser is commonly seen here.

The first phase of the boss is it fires 3 shots in a spread motion from its 4 green colored cannons, once 3 out of 4 of these green colored cannons are destroyed, the 2 back cannons will start laying out Razer bombs, the back cannon that is also following the direction of your ship that isn't doing anything before will also start firing at you with orange shots, at this point only the back cannon and the fourth green cannon are the remaining boss parts, once they have been destroyed the boss will be defeated. 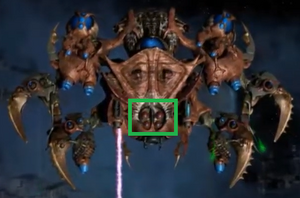 The real introduction to Triple shot is this mission, Nukes are a common sight here, Heavy variations of Smashers will start appearing along with light Interceptors as well as Phantoms.

The first phase of the boss is that it fires single shots from its blue colored cannons, while the blue colored cannons at the back will fire directly at your ship, the boss also fires 1 large blue bullet from its mouth which is aimed directly at your ship, and the boss will also fire lasers from both of its laser cannons with an indicator, only the "eye" can be hit and destroyed so the attack pattern won't change. 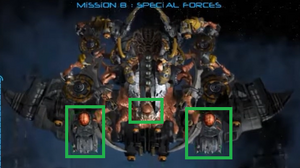 Heavy variations of Fighters will start appearing here, Green flame is common in this mission, and this is also where Four shot will become commonly available, Medium Barriers will be introduced and Corrosion will start to drop here, Emitters will also make their debut here in this mission.

The first phase of this boss is it fires single shots from both of its small cannons at the front, while laying out Demolisher bombs from both the left and right side, the boss will also throw 2 saw-like weapons directly at you, once the saw-like weapons are destroyed, the boss will also stop laying Demolisher bombs but it will start rapidly firing single shots from its small cannons, Razers will also come in to assist the boss for extra firepower, at this point the "eye" is the part that can be hit and the boss will be destroyed after the eye takes enough damage. 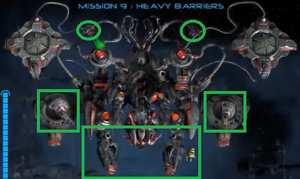 The heavy variation of Builders will be introduced in this mission, and all extra weapons will be available on this level especially Chain Lightning, an extra weapon that you won't see much.

The first phase of the boss is where it fires 2 single shots from both of its arms in the front, while 2 cannons will fire single shots directly at your ship, the mouth shoots orange bullets downward and the boss will also constantly lay out Demolisher bombs on both sides, the cannons on the back will rapidly fire 3 shots in a spread fire motion into the opposite direction rapidly when the ship gets close to its range, when one of the 4 cannons are destroyed, the 2 spawners at the back will be active and will produce heavy Fighters will come in to assist the boss for extra firepower, the attack pattern of the boss will not change at this point and even if you destroy the other cannons, they will still keep firing, this is most likely an intended mechanic to make the boss difficult to destroy, when the last of the 4 cannons are destroyed, the boss will be defeated. 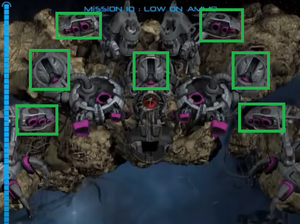 The heavy variation of Interceptors will be introduced in this mission, and this mission will return to the very first variation of Transport-only level in Mission 1 except this time they can now fire and they also move faster, and Low on Ammo as what the name of the mission is, literally implies its name by making it so that every level in this mission will have limited extra weapon drop, the first 2 Transports that appear on the beginning of each level are the only aliens that will drop extra weapons, so if you fail to kill the other Transport or you failed to kill both of them, you won't have any or good number of extra weapons to use in the level as any power-ups that will be dropped for the rest of the level even from Transports are mostly only Weapon grade power-ups and Armor Plates, this mechanic applies to all level in Level 10 except the boss level, one of the stages contains 2 guaranteed Nuke drops, which means you can skip either the current stage and one more stage later or the next 2 stages with it, the boss in this level will also be extremely difficult so if you don't know how to dodge well, you must have a great number of lives first before fighting the boss.

Here are the limited extra weapon drops for all applicable levels in Mission 10:

The Transports will go upwards faster and faster, you can only choose between 3 weapons, either the Nuke you got from Level 8, Laser, or Chain Lightning that can drop in this level but assuming that you want the Chain Lightning, get the Laser first then fire it on the right Transport

The boss has 6 hittable parts in total, the first phase of this humungous boss is it will fire 3 shots in a somewhat spread fire motion from its 4 indicated cannons that can be hit and destroyed, the other cannons that cannot be shot in the center will also fire single shots, 2 cannons beside it will fire 2 large blue bullets aimed directly at your ship, and the 3 auto-aim cannons from the middle will fire single shots directly at your ship, the attack pattern will not change much because the attack pattern is already difficult to evade, once there are only 3 cannons left the boss will start producing medium Fighters for firepower assistance, the boss will destroyed when the last cannon is destroyed.