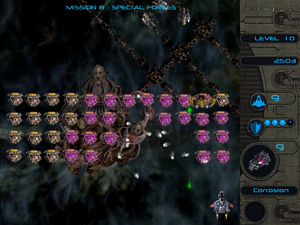 Your ship will have its primary weapon which consists of some sort of a blue plasma shot, this shot can be increased or upgraded with the Weapon modifier power-up and there ways to improve this shot as well, which will be given on the Strategies and Techniques page, one thing to note is that Triple shot is better in some ways, and Four shot can also be better in some ways, it is up to you if you want extra coverage or better damage per shot.

The game offers different kinds of extra weapons to use, 2 of them are intended for destroying Barriers specifically, and some of the other extra weapons will be available on later missions.