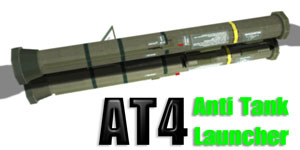 The M136 AT4 BDM is the Army's primary light antitank weapon. It is a recoilless rocket launcher used primarily by infantry forces for engagement and defeat of armor threats. The design permits accurate delivery of a 84mm High Explosive Anti-Tank (HEAT) warhead providing excellent penetration capability and lethal after-armor effects.

The system weighs approximately 15 lbs and is man-portable. The AT4 system consists of a free flight, fin-stabilized, rocket packed in an expendable, one-piece, fiberglass-wrapped tube. The launcher is watertight for ease of transportation and storage. The M136 AT4's warhead uses an extremely destructive, 440-gram shaped-charge explosive that can penetrate more than 14 inches (35.6 cm) of armor.

It is a single shot, disposable munition that is usually used to destroy walls, gates, and Strykers. Tests have shown that this will function the same as the RPG, except it will have a larger blast radius and cannot be reloaded. Info subject to change.

In game, the AT4 will take two (2) shots to destroy the OpFor Stryker.