From StrategyWiki, the video game walkthrough and strategy guide wiki
(Redirected from Amnesia)
Jump to navigation Jump to search 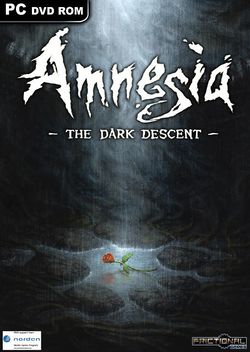 Amnesia: The Dark Descent is a horror game released by Frictional Games in 2010. It follows the story of Daniel, as he is being chased by a shadow, where he uncovers his dark past within Brennenburg Castle in an attempt to redeem himself.

In April 12, 2011, it received a the Justine expansion, as part of a cross-promotion for Portal 2.

Note: This game is heavily based on proceeding through unknown territory. Reading any part of the walkthrough risks ruining the experience, even more so than other games.