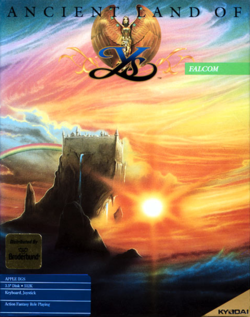 This is the first game in the Ys series. For other games in the series see the Ys category.

The game was also released as part of a compilation, Ys I & II, for the PC Engine/TurboGrafx-CD in 1989, along with Ys: Ancient Ys Vanished's 1988 sequel Ys II. Subsequent versions of Ys I & II were released, with new titles, for Windows (2000), PlayStation 2, Nintendo DS, PSP, again for Windows (Vista/7), and finally Steam.

Long ago, the land of Ys was created by two goddesses, one which represented order and the other which represented freedom. Together, they watched over the land, as the people of Ys lived in harmony. A metal known as Cleria was discovered. At first, its discovery was seen as a sign of fortune, but it soon brought disaster to the land. Six priests wrote the collected history of Ys, its prosperity as well as its calamity, in six books, and these books were imbued with the power of Ys. Ys disappeared from the landscape soon afterward, but life around it continued on.

When the game begins, a young adventurer named Adol arrives in the land of Esteria. He discovered a towns of people terrified by the monsters that roam the earth, as well as thieves who seem particularly focused on items made from silver. Adol meets a fortuneteller named Sara, who foresaw his coming. She calls upon Adol to brave many dangers and seek out the six legendary volumes which explain the mystery behind Ys' disappearance.

Once he is fully prepared, Sara gives Adol a crystal for identification and instructs him to find her aunt in Zepik Village, who holds the key to retrieving one of the Books. With that, his quest begins.

Versions of this game have been released from 1987 to as recently as 2009. In many cases, the game was released independently from its sequel. However, because the sequel Ys II begins literally moments after the first Ys ends, they have been released together on numerous occassions as a compilation.

Because of the multiple releases, as well as the various translations of the game that have been produced, the name of this game is often misspelled, rearranged, or simplified in various ways (officially and unofficially). Sources for these various names include the box artwork, the manuals, and the title screens. Surprisingly, many of the Japanese releases utilize English to display the title.

Below is an attempt to summarize the various releases and the titles they used. For more information about each version, please see the Versions page.