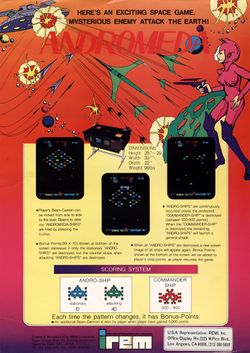 Andromeda is Irem's second arcade game, released in 1979, and running upon that company's M10 hardware (a Motorola M6502 running at 2.5 MHz); it is a fixed shooter in which the player must use a two-directional joystick to direct a ship at the bottom of the screen left and right and a single button to make it fire shots at a formation which is comprised of thirty-three enemies, known as "Andro-Ships", which are worth 10 points if killed while in the formation, and 40 points if killed while attacking. Unlike Namco's Galaxian, which was released earlier in 1979, "Andro-Ships" will get continuously recruited, unless the protected "Commander-Ship" (worth 500-900 points) in the centre of a formation is killed - and after this happens all the remaining "Andro-Ships" will launch a general attack (the equivalent of the "melee" in Galaxian). The bonus point value (which starts out at 99 x 10) will decrease each time a stationary Andro-Ship is killed, but stops when a single attacking Andro-Ship is killed; once the last Andro-Ship is killed the bonus value will be added to your score and you proceed to the next pattern.