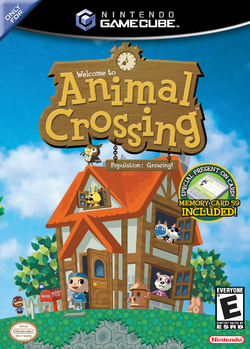 Nookipedia has an article about:

Animal Crossing is the first game compatible with the short-lived e-Reader.

As a real-life simulation video game, Animal Crossing revolves around you—the player—as you live day-by-day in a town full of animals. However, up to four humans can live in a town at a time. Just like the real world players must run errands, earn money, and even pay debt. This game then birthed a sequel with the Nintendo DS game, Animal Crossing: Wild World (おいでよどうぶつの森, Come to Animal Forest).