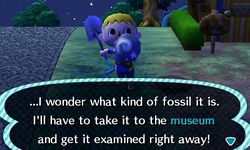 Fossils are the preserved remains of creatures and plants that existed during prehistory. You can find 4 of them buried in the ground everyday, which you must use a shovel to dig out. All fossils must be assessed by Blathers to be of any use. Assessed fossils can then be donated to the museum, sold at Re-Tail or displayed at home. There are two main types of fossils: small fossils and large fossils. Small fossils only take up 1 space and doesn't consist of multiple parts. Large fossils typically take up 4 spaces and consists of 2 to 5 parts.

The following are all the small fossils arranged in alphabetical order accompanied by their Re-Tail sell price.

The following are all the large fossils arranged in alphabetical order accompanied by their Re-Tail sell price. Note that all large fossils have the Quirky HHA Theme, so collecting them might be worthwhile when going for a theme challenge.