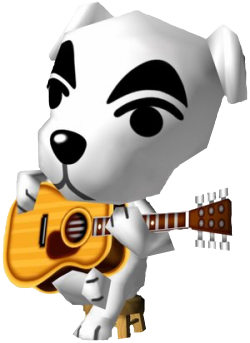 K.K. Slider, or Totakeke in Japanese, is a dog that comes to town in Animal Crossing: Wild World every Saturday night and plays music for your enjoyment. You can request a song, or listen to one he randomly selects for you.

He performs in the Roost café in the basement of the Museum every Saturday night between 8pm and midnight. He'll be sitting on stage in front of the piano with his guitar. However, K.K. disappears into the back room of the café if your gate is open.

K.K. Slider has 70 songs in total. The ones in bold are new for Animal Crossing: Wild World

K.K. Slider is very picky about what you call his songs. He will only play your requested song if you type the name exactly as it is listed here — all punctuation must be observed.

It is also possible to get more than one song from K.K. Slider each week, by creating more than one character within your town. K.K. will give you one bootleg per character.

On top of that, you can theoretically listen to all 70 of his songs in one night. All you have to do is fill up your inventory, so that once he finishes a song, he won't be able to give you a bootleg, and he'll be willing to play more for you. However, listening to all of his songs may take many hours, since his songs are generally 2 minutes long and it takes a while to actually request a song and get him to start playing.

You can get K.K.'s picture by giving him a Country Guitar. You can receive one as part of the Golden Axe trading game, or buy one at Nook's if he's got it in stock.