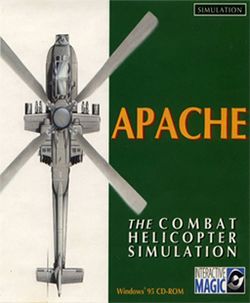 For a simulator of a similar aircraft, see AH-64D Longbow.

Apache is a computer game co-developed and published by Digital Integration and Interactive Magic in 1995 for MS-DOS and Macintosh. The game is a combat flight simulator of the American AH-64D Apache Longbow helicopter.

In Campaign mode, the player can choose which 3 areas to enter in a tour of duty. The Campaign mode also plays video clips and has a briefing before any mission. The player is given a choice of ordnance, and is able to zoom in on the mission map, giving them a satellite view of the area or target and meteorological data.