The whole episode starts in an art room. We see a mystery person draw something, but it never shows who, or what.

We then cut to a game of poker. In the end, the two show full house. One of them wins and a bottle is picked up. It looks like a bottle is hitting someone. We then see cards drop and we see what looks like an unmoving body. A phone call is made. What just happened? 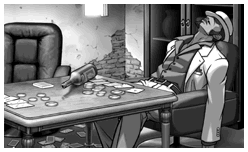 Apollo Justice This is Apollo's very first case as a defense attorney. He didn't expect to defend a legend of his job, or a former legend anyways.

Phoenix Wright Phoenix is much more laid back than he was 7 years ago. He lost his badge sometime after the events of Trials and Tribulations. Now he works at Borscht Bowl Club as a pianist and undefeated poker player. Just what happened that made him turn in his badge? That's for later. What matters right now is you have to defend this man.

Shadi Smith A mysterious world traveler. He played poker with Phoenix at Borscht Bowl Club before he was murdered. Just who is he anyways?

Winston Payne The rookie killer is back in action and yearns to see his enemy leave in cuffs. You only face him in this first case of the game. A tradition to the series.

Olga Orly A waitress at Borscht Bowl Club. She claims to have witnessed the poker game that may have triggered the murder.

Kristoph Gavin Apollo's mentor, who is a defense attorney himself. Kristoph is highly experienced and sometimes sees things that Apollo doesn't. Kristoph is actually a friend of Phoenix, but why did Phoenix chose you to defend him? He will teach you about the basics of Court Mode in this case.

A magician you'll briefly meet in this case. Just who is she?