You meet Trucy, who looks actually fine. Where is the kidnapper? Trucy summons a wooden puppet, which she calls Mr. Hat. It looks like she used the puppet to help you. Why? Trucy will now say she can tell when the witness isn't confident on what he was saying, as she has the power to perceive people's habits. Despite your protest of pressing charges, she tells you that you're in trouble and she's giving you a lifeline in this case.

You are given a choice, it doesn't matter which. Take Stickler for example. When he said something he wasn't sure about, his fingers were fiddling with the pages. How were you supposed to see that? Trucy says that's how Phoenix is undefeated for seven long years. She helped him during bigger matches. Does that mean he was cheating?

Trucy will say you have that power also. Could this be the power Phoenix was talking about in the last case? She tells you to "watch" the testimony, and "perceive" the truth. Time to head back in.

You will hear Stickler's last testimony again. Apollo and Trucy tells the judge the kidnapping has been "resolved" (because telling the judge that it's just Mr. Hat, the puppet, is just silly).

Stickler's Testimony
- From Shot to Call -

Your bracelet suddenly feels funny. Is it telling you something?

From Shot to Call: Cross-Examination[edit]

button. Just then, you suddenly get a clear expression of his face, and only his face. What's happening? Trucy says you are "focusing", meaning you can see all of Stickler's actions. Trucy says you can look everywhere else. (By using the touch screen, or using

). At this case, move to Stickler's fingers on the corner of the page of his book. Now, Trucy wants you to wait on a certain part of his statement to see his habit. Then put the cursor on the habit and either press on the Perceive gauge, press

, or yell "Gotcha!" on the mic. On this case, perceive on the following:

Perceive on the part written in bold. You will ask a few questions about the cell phone. On the following choices, either Ask for his number, or Ask to see his phone. Stickler will reveal that he lost his cell phone. You eventually come to realize that the cell phone you found at the Meraktis's garage yesterday is the phone Stickler lost!

Congratulations, you have mastered the art of perceiving!

So if he did lost the cell phone before the crime, how did he manage to call the police? Stickler will confess that he reached the pay phone after watching the crime commit. The pay phone was across the street from the agency. Stickler lied, because he didn't want the court to know he dropped his cell phone at Meraktis's garage. The Cell Phone is updated in the Court Record.

You are now asked to prove that Stickler lost his cell phone just before the murder. Show evidence and Present the Mirror. That night, a person driving that car hit a pedestrian. He stopped at the garage before 9 PM. Afterwords, Stickler dropped the cell phone under the tires AFTER 9:00 PM, because if the car came later, the phone would have been crushed under the tires!

You now have proven that Stickler broke into Meraktis's garage the night of the murder. He asks for Klavier's help. Stickler will testify once more.

No reaction from your bracelet, it looks like you'll have to do this the old fashion way.

Press on the 4th statement, then ask about The noodle stand. Stickler will say the stand said "NOODLE". When asked if this is important, say it's Very important. A new statement will be added. 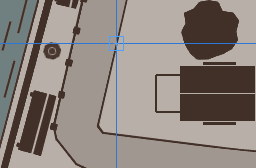 Present the Noodle stand on that statement. Didn't the sign say "ELDOON"? Stickler swears that it said "NOODLE". He read it from where he was. It looks like he saw that the sign said "NOODLE" and he saw it right. How? It could mean that he saw the sign from another spot. On the map, Present the spot just above the stand. He must have viewed the murder from the north. Behind the "ELDOON" side of the stand, it says "NOODLE"! This proves that Stickler saw the crime from the NORTH, not the SOUTH!

Klavier objects by saying that where Stickler was standing is irrelevant! Trucy counters it by saying it changes everything.

Trucy will explain a contradiction. When Stickler saw the crime, he yelled. The two men turned their heads to Stickler before the killer fired, shooting the side of Meraktis's head. If Stickler called out from the south side, as he claimed, Meraktis could have been hit on the right temple. But if Stickler was viewing from the north side, as you have proven, then Meraktis could have been shot in the LEFT temple. According to the autopsy report, Merakis was shot on the right side!

It looks like Trucy has pointed out a major contradiction to the case. (No help from you). So, is Stickler the real murderer? When given a choice, Accuse of another crime. There has got to be another reason Stickler was on the north side. He doesn't seem guilty, but not innocent either. When given the chance, Present Trucy's Panties.

On the night of the crime, someone had stolen some girl's panties. The girl (Trucy) gave chase, but the thief got away by hiding himself in Meraktis's garage. You found those panties in the exhaust pipe of the car in it, so Stickler could have hidden them in there!

At this point, Stickler will confess for stealing Trucy's panties and will explain his motive. He was a regular at the Wonder Bar, where Trucy performs all of the time. It was her panties that Stickler was astounded about. She pulls objects rather larger than the panties out of it. Stickler was extremely curious about the panties and steals it, so he could know it's secrets.

Klavier now asks why would Stickler lie about the location he was at, as he didn't carry Trucy's panties at the time (he was forced to abandon them at the garage). Present the Bloomers. At the position he was at when he saw the crime, there was a trash can next to him. Inside the trash can, you found the bloomers. Stickler will confess that he also stole the bloomers and threw them away afterwords, because he would be searched and found out about his crime!

Though Wocky is still the prime suspect, (he had a motive and opportunity) there is still a mystery about the wound. When Meraktis turned to the position of Stickler, the one you have proven, he should have been shot in the left temple, but was instead shot in the right.

Only an investigation would help solve this mystery. The Judge adjourns court for today.