The whole thing kicks off with what looks like a rock concert. It looks like we are seeing one of Klavier's gigs. He calls for an intermission. 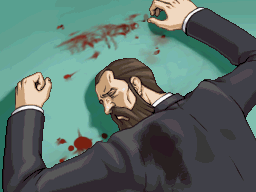 Apollo Justice Apollo was reluctant to go to a concert (let alone Klavier's). He actually saw the victim die right in front of him. Can he manage to defend a person who can't even speak his own language?

Machi Tobaye A blind and timid piano player, who actually plays it very well. He doesn't speak English, so how can you defend him?

Romein LeTouse A man who is honest and rarely shows pain. Romein was the bodyguard of Lamiroir. You actually hear his last words before dying.

Klavier Gavin His rock & roll side of his life is depicted in this episode, and of course, things didn't go well like they should have.

Lamiroir Known as "Siren of the Ballad". Lamiroir is modest when it comes to her moving talent. She was a guest singer at the Gavinners concert when the murder occurred.

Trucy Wright Your assistant and a magician. Trucy loves to play tricks and can sometimes outright pester Apollo.

Detective Ema Skye A detective who uses scientific tools to investigate. She actually wanted to be a scientific investigator, but was pushed into the precinct instead. Ema can't really stand Klavier, and is, of course, reluctant to come to the concert from the beginning.

Daryan Crescend A guitarist of the Gavinners. He can be either be serious or be a jerk depending on which situation he is in.

Valant Gramarye A brilliant magician, who happens to be Trucy's uncle! What is he doing here?

Phoenix Wright A man who can't play piano, but can play poker. He seems to be on a personal top secret mission.

Wright Anything Agency This is where you work at.

Detention Center This is where your clients (in this case Machi) are being held.

Sunshine Coliseum A fabulous coliseum, where Klavier's concert is held at.

Backstage Hallway This is the backstage hallway, as the name suggests.

Lamiroir's Dressing Room The crime scene, here you see everything that occurred.

Klavier's Dresing Room The title pretty much describes the room.

Klavier's Office Klavier's prosecutor's office. This is where he works. Just look all of the fan stuff here.

Hickfield Clinic This is where patients are held. Very familiar to Ace Attorney fans.