The Judge sees that the revolver is large enough to break a few bones. Klavier states that when the murder happened, there where two witnesses that heard the gunshots (You and Ema) both witnesses broke into the dressing room, only to see that the murderer wasn't there. It may seem impossible, but only Machi could have pulled it off. How so? Klavier will say that Machi did it under certain circumstances.

Ema is called to the stand. She will testify about those unusual circumstances.

Press on all statements:

As usual, everything is pointing at your client, even The Judge is ready to hand down a verdict. Klavier however, says that they don't have a decisive witness yet, and asks you if it is necessary to call one. When given the choice, say Call a witness. Remember, just before LeTouse died, he said to you, in his dying words, that the witness was "the siren". When asked who that was Present Lamiroir's Profile. Lamiroir is known as the siren.

Lamiroir is called, revealing that she speaks English, very good in fact. Klavier will say that Lamiroir has suffered amnesia, not knowing her past before her time as a singer. She didn't expect to be called up here to testify, let alone by you. Lamiroir starts to testify about what she saw.

Lamiroir's Testimony
- What I Saw -

Present Lamiroir's Brooch on her 3rd statement. After the 2nd act, you found the brooch backstage. Does that mean that Lamiroir did go backstage after the 2nd act? Lamiroir then says (in Borginian, translated by Klavier) that she was only at her dressing room in only a short period of time. When she went out as soon as she heard you come in (you heard the door shut, remember?). Two new statements will be added:

Use your bracelet on the latter statement:

Perceive Lamiroir's neck. It looks like she is gulping as she mentioned LeTouse's body. Lamiroir asks why LeTouse had to be shot. Hold on... how does Lamiroir know that LeTouse has been shot? She has just contradicted her own testimony! When asked for proof, Present the Investigation Request. There was a gag order not to tell anyone involved that LeTouse has been killed. Lamiroir asked for what happened that night, and just now testified that she saw nothing, so how did she know LeTouse had been shot.

Lamiroir thinks for a moment and asks to revise her testimony. Another new statement will be added.

She slipped up again. Present the Diagram on that statement. There were bullet holes on the wall where the door is, so if Lamiroir did see the crime for a moment from the door, she would not have seen the bullets!

It seems the "Siren of the Ballad" has seen more of the crime than she says, and LeTouse says she witnessed the murder. Is she hiding something? She will testify more of witnessing the murder.

Lamiroir's Testimony: What I Saw 2[edit]

Lamiroir's Testimony
- What I Saw 2 -

A grown man, eh? Press on the 5th statement. Lamiroir says that the grown person was a man, a young man. She can hear a voice and never forget it, so she was certain that it wasn't LeTouse who spoke. It looks like a good testimony. When given the choice, you can say It's contradictory, arguing that if it was a grown man what she heard, how could the man get away? There was no way he could have fit in the air vents. Saying It's pretty good doesn't penalize you in any way, other than having Klavier making fun of you (nothing new by this point)

Klavier will say that there is another contradiction. The window Lamiroir saw through was closed, so she could not have heard the man speak. Therefore, what she had testified sounds quite dull for being decisive! Thus, Klavier requests that Lamiroir leaves the stand and Ema retakes it. The Judge takes it, unfortunately for you.

The cross-examination of Ema continues where you left off. Ema will testify again, this time about LeTouse's missing and found body. 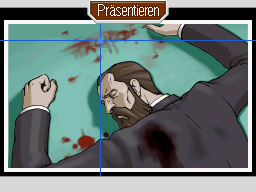 A signature!? Press on the 4th statement. Ema says this "signature" was the bullet holes on the wall. Remember, Machi is blind. The killer fired the gun twice by using sound. He shot at five feet. The first shot missed, and the second hit. The killer could have killed LeTouse in one shot... if he could see. When given the chance, Raise an objection. You say to the court that the recoil of a gun this size could tear off a tiny person's arm! However, Machi is very tiny, so it looked like you had just pointed to Machi as the killer. Klavier has Ema revise her testimony.

Present the Crime Photo. There is something in there that contradicts Ema's testimony. When asked what, Present the blood. It looks like there is some sort of washed writing on there. It looks like LeTouse was trying to write the name of the killer! If Machi wasn't blind, he could have rubbed off those unseen letters!

Alternatively, you can press on the new statement (about the shooter was blind). After such a long winding back and forth conversation, choose I've got just the thing!. Then present Crime Photo for the same thing.

It looks like you are about to get Machi off the hook. However, Klavier pounces. He announces to the court that he had received reports about Machi, which reveals that Machi WASN'T blind! In fact, he can see perfectly!! The "fact" that he is blind was actually a publicity ploy by the Borginians! So, if Machi really can see, that makes him the prime suspect again!!!

Ema then gets an idea. She wants to test the rubbed blood with luminol, the chemical that can react to the stickiest parts of the blood. She wants you to test it on the carpet. It is quite simple, just touch the

everywhere, until you get a reaction. You remember in the first game "Rise From The Ashes" in which you try it in the "Parking Lot" and the "Detective Locker Room".

You will find the writing. It says "IPXX314206". Is that the killer? Klavier explains that it an ID number for Interpol, the international police agency, where policemen from all around the world investigate crimes everywhere. Is Machi an undercover agent? How does LeTouse know the number? Klavier will call up Daryan, to have the code analyzed.

We now ask a question, why would Machi pretend that he is blind? He supposes you know the answer. Machi didn't pretend for himself, but for someone else. When getting the chance, Show evidence, then Present the Postcard. It looked like Machi and Lamiroir had been the guide and follower. If that is true, then if Machi isn't blind, then Lamiroir could be the blind one! How is that possible!? Doesn't she write music by sight!?

Lamiroir is called up again. She confirms that she really is blind! This probably what Klavier means when he doesn't have a "direct" witness. Lamiroir will testify about her condition.

Klavier looks into Lamiroir's earlier testimony, stating that she "witnessed" the events through a closed window. Lamiroir insists that she heard the two men's voices. She would recognize the voice if she hears it again.

Just then, bailiff interrupts the court, announcing that Daryan has brought back results. He reveals that the number ("IPXX314206") belongs to LeTouse! LeTouse was an undercover agent!? Daryan then reveals that the murder weapon belonged to LeTouse! The Revolver is updated in the Court Record.

Just when Daryan was about to leave, Lamiroir interrupts. She suddenly recognizes the voice she heard at the crime. It belongs to Daryan! Could this mean that the shooter could be him!?

The court responds with such a chaotic state, The Judge calls off today's trial. It looks like there is something about the guitarist/detective guy.