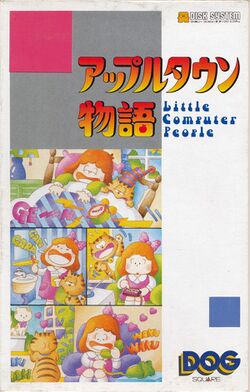 Apple Town Story (アップルタウン物語, Apple Town Monogatari?) is a port of Little Computer People to the Family Computer Disk System. The port was released by Square in 1987 and consists of watching an animated little girl wander around her house and play with her cat. The game offers little interactivity, and there is little plot or actual gameplay. The game is seen as a precursor to Tamagotchi and Princess Maker.

Apple Town Story represents the only attempt to bring David Crane's Little Computer People to Japan, at least conceptually. While the basic premise was kept the same, many details were altered to make the game fit a limited console platform, as well as a culturally Japanese audience. For one thing, without the presence of a keyboard, input was changed from keyboard hot keys and typed in requests to a simple icon driven menu bar. Aesthetically, LCP's grown man was changed to a school-aged girl, and the dog was changed to a cat. The house underwent some alterations as well, although the same basic features are present.

Unlike the special production process that was used to generate unique characters in Little Computer People, every copy of Apple Town Story is identical and contains the exact same girl. She will happily move about the house on her own accord, occupying herself with various activities. You can interact with her strictly through a menu of icons which you call on to the upper right portion of the screen by pressing

. Once on the screen, you can use

to cycle through the eight options, or press

Unlike Little Computer People, Apple Town Story does not keep an accurate clock. On the screen, you will see a digital clock which updates in five minute increments every couple of seconds. The girl's natural period of being awake is between 7 AM and 9 PM. When the girl goes to sleep at 9 PM, the first hour passes normally, and then time is accelerated until 7 AM comes around again, and the girl's alarm goes off. When the girl is awake, she will engage in different activities. Four of them will result in a special animation which replaces your regular view of the house. You can see still shots below for each of these animations. 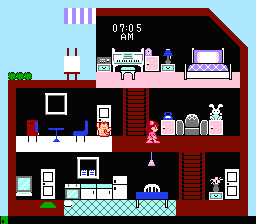 The house is broken into three stories. Each story has a different feature.

The top floor contains the girl's bedroom, as well as an outdoor terrace. In the bedroom, the girl will sleep in her bed, do exercises, play piano, or put on a record (to which she dances in the middle floor for some reason). Out on the terrace, she may decide to water her garden, or paint on the easel. Every time she completes a painting, she will take the canvas down, and hand it on the wall in the middle floor. Don't be too surprised to find the cat sunbathing itself on the roof of the house if it manages to escape through the front door.

The middle floor contains the girl's den and living room. The den is where the TV is located, which she may turn on or off, and where she will hook up the Famicom to play a game or two. When she puts a record on in the top floor, she will come down here to dance to it. The den also contains her closet where she will change clothes. In the living room, she will sit and talk on the phone, or quietly read a book which she takes out of the cabinet next to the chair.

The bottom floor is primarily composed of the kitchen, and it is where the front door of the house is located. The kitchen is used for the usual purposes; cooking food, and keeping milk in the fridge. The cat's bowl is also here, and the cat will always run when he hears the girl putting food in there. On the left side of the kitchen is the bathroom of the house. She may step behind the door to use the toilet, or stand in front of the sink to wash her hands (always after painting) or brush her teeth.

The game contains a number of hidden codes which can be entered with the second controller for many surprising and often humorous results.